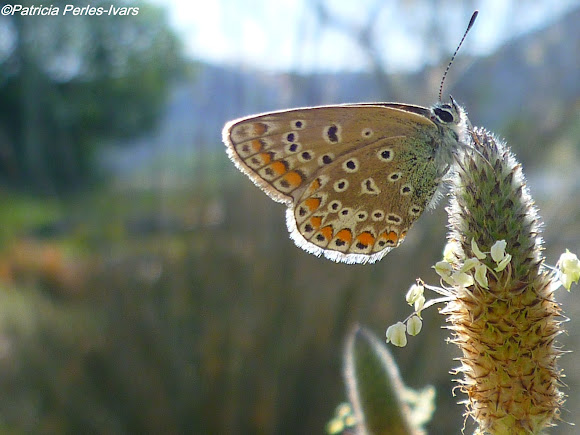 Male uppersides are an iridescent lilac blue with a thin black border. Females are brown above with a row of red spots along the edges and usually some blue at the base of the wings; the upperside may be mostly blue, especially in Ireland and Scotland, but it always has red spots. Undersides have a greyish ground colour in the males and a more brownish in the females. Both sexes have a row of red spots along the edge of the hindwings and extending onto the forewings, though they are generally fainter there, particularly in the males, where they are sometimes missing altogether. There are about a dozen black-centered white spots on the hindwings, nine on the forewings. These usually include one in the middle of the forewing cell, absent in Chapman's and Escher's blues

The common blue is Britain's (and probably Europe's) most common and most widespread blue, found as far north as Orkney and on most of the Outer Hebrides. Males are often very obvious as they defend territories against rivals and search out the more reclusive females. A range of grassland habitats are used: meadows, coastal dunes, woodland clearings, and also many man-made habitats, anywhere their food plants are found.

@bayucca, I've been searching in the internet, and I found one difference between P. icarus and P. thersites, is the little spot in the lower part of the upper wing, it is absent in P. thersites.
Thank you very much for your help!

agree! Thank you for the correction. smiles!

Lycaenidae, Polyommatinae, Polyommatus sp. and probably Polyommatus icarus. I am pn the road and it is a blind ID, so links are coming later. The other candidate would be Polyommatus thersites, but spots are slightly different. And it is a female.

someone can help with the id, please?
thank you!
:)