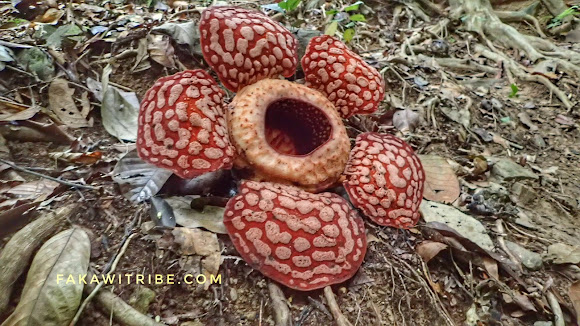 Harvard researchers have now discovered that food and water aren't the only things the corpse flowers steal - over the course of evolutionary history, Rafflesia has also stolen Tetrastigma's genes. The corpse flower and its host have a very intimate relationship. From the start, Rafflesia burrows into the Tetrastigma's tissues, growing as thread-like strands in direct contact with the surrounding vine's cells. They are so dependant on their host that the corpse flowers have even lost the ability to make chlorophyll, a requirement for photosynthesis, and thus defy the very nature of being a plant by being unable to produce food from sunligh

Epic spotting! Love the Rafflesia! I've been lucky enough to see this species too and four others. Interesting new facts about it, thanks for adding those notes. They're such a fascinating plant.

thanks! i was really lucky to spot this one. bucket list.
this flower blooms deep in the jungle and only once in 8-9 months.
wilts and dies in 7 days. This was day five of the bloom.

"Somehow, after generations and generations of intimate contact between parasite and host, Rafflesia has ended up with more than the usual parasitic spoils. As a new study published today in BMC Genomics reveals, the parasite expresses dozens of genes that it has co-opted from its host. "