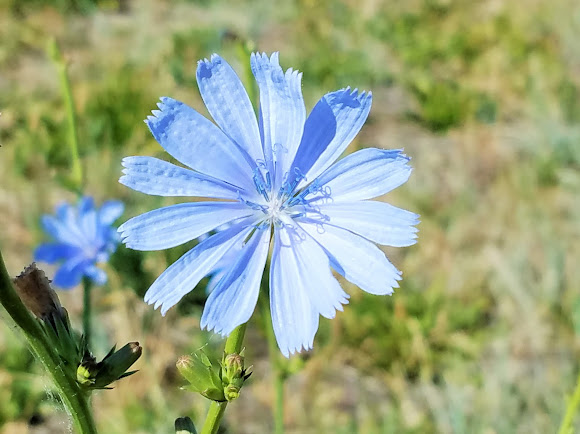 Cichorium intybus is a tall wildflower that is native to Europe and is in the dandelion family Asteraceae.

Root chicory (Cichorium intybus var. sativum) has been cultivated in Europe as a coffee substitute. The roots are baked, roasted, ground, and used as an additive, especially in the Mediterranean region (where the plant is native). As a coffee additive, it is also mixed in Indian filter coffee, and in parts of Southeast Asia, South Africa, and southern United States, particularly in New Orleans. In France a mixture of 60% chicory and 40% coffee is sold as Ricoré. It has been more widely used during economic crises such as the Great Depression in the 1930s and during World War II in Continental Europe. Chicory, with sugar beet and rye, was used as an ingredient of the East German Mischkaffee (mixed coffee), introduced during the "East German coffee crisis" of 1976–79. It is also added to coffee in Spanish, Greek, Turkish, Syrian, Lebanese and Palestinian cuisines. Some beer brewers use roasted chicory to add flavor to stouts (commonly expected to have a coffee-like flavour). Others have added it to strong blond Belgian-style ales, to augment the hops, making a witlofbier, from the Dutch name for the plant. (Wikipedia)