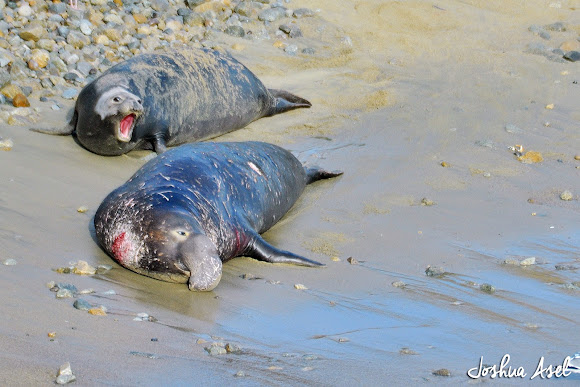 Northern female elephant seals have lived to 22 years, and can give birth starting at the age of three to four. Males reach maturity at five to six years, but generally do not achieve alpha status until the age of eight, with the prime breeding years being between ages 9 and 12. The longest life expectancy of a male northern elephant seal is approximately 14 years.Northern elephant seal bulls reach a length of 14 to 16 ft (4.3 to 4.9 m) and the heaviest weigh about 5400 lbs (2455 kg).

Loud and boastful, evidence of their power can be seen in one of these bulls viscous wounds, a battle which I only missed by minutes as the wounds were still clearly fresh. These Elephant Seals have just reared their young for this year. The pups eyes (picture 3) are barley open. Although I don't know much about them, I imagine they couldn't be more than a couple weeks old. Sadly, after the 3rd picture was taken, the baby in the bottom left was accidentally crushed by a bull. Surprising to me, this is very common and is part of their way of life. Both Northern and Southern Elephant Seals were hunted to the brink of extinction by the end of the 19th century, but numbers have since recovered (yay).

Are they breeding on the beaches of N San Diego county? How the state of my birth has changed. I must get back home.

OMG the babies are precious!!!