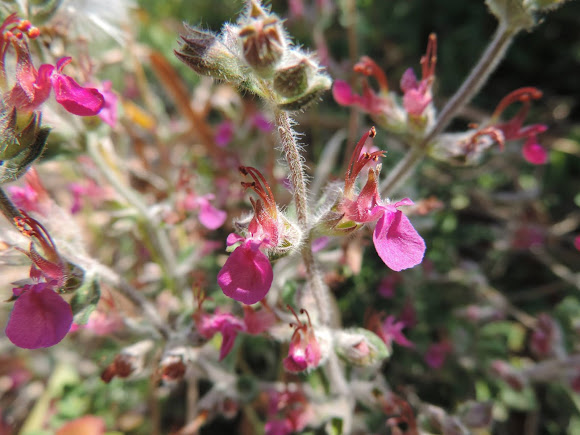 Teucrium is a genus of perennial plants in the family Lamiaceae. The name is believed to refer to King Teucer of Troy. Members of the genus are commonly known as germanders. There are hundreds of species, including herbs, shrubs or subshrubs. They are found all over the world but are most common in Mediterranean climates. An unusual feature of this genus compared with other members of Lamiaceae is that the flowers completely lack the upper lip of the corolla, although it is somewhat reduced also in other genera (Ajuga among them). Several species are used as food plants by the larvae of some Lepidoptera species including the Coleophora case-bearers Coleophora auricella and Coleophora chamaedriella. The latter is only known from Wall Germander (T. chamaedrys). Teucrium species are rich in essential oils. They are valued as ornamental plants and a pollen source, and some species have culinary and/or medical value.