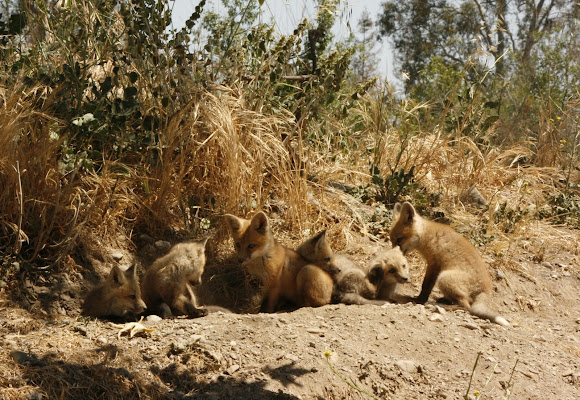 A family of foxes at the opening to their den. There are at least five kits. I think the largest, reddest fox might be the mother, but I'm not sure. They were playing and lounging in the sun. So cute! These foxes have become local celebrities. Their den is right next to a popular bike trail, and news of them has gotten around. There was an article about them in the neighborhood paper, soon after the kits were born. People on the trail often pause to look for them or watch them. The foxes seem not to mind, so long as the people stay far enough away and don't make any sudden movements. I've heard of a few people harassing them (trying to feed them dog food, some boys putting a stick into their den), but the vast majority have been respectful and left them alone.

Chaparral next to a dry arroyo. Their den is in a small hill, with a good view of the surrounding area.