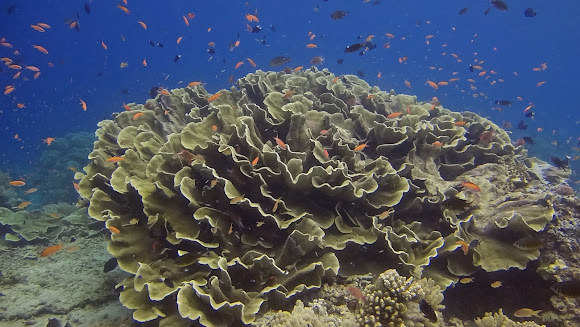 Montipora is a genus of small polyp stony coral in the phylum Cnidaria. Depending on the species and location, Montipora may grow as plates or ridges, appearing to some as a bowl or flower. Undisturbed, the plates expand radially and may encrust over surrounding rocks, shells or debris. These corals are extremely common on reefs in the Red Sea, the western Indian Ocean and the southern Pacific Ocean, appearing as far north as Hong Kong. There are seventy five known species. Members in this genus are usually thin corals that form leafy, plate-like, encrusting or semi-massive colonies. The colours vary greatly. The calices are less than 2 mm in diameter and are usually well separated by the coenosteum. The skeleton is lacy, the walls are indistinct and the septa, when present are small and in 2 cycles. The columella is rarely developed and the corallites are inconspicuous and appear empty as the polyps are very small. Like other corals, Montipora corals are colonies of individuals, known as polyps, which are about 2 mm across and share tissue and a nerve net. The polyps can withdraw into the coral in response to movement or disturbance by possible predators, but slightly protrude when undisturbed. The polyps usually extend further at night to capture zooplankton from the water. These corals have zooxanthella, a symbiotic algae that lives inside the cells of the polyps and produce energy for the animals through photosynthesis.

Thanks, @LeanneGardner for your kind words and appreciation :)

Thanks, @Daniele for the surprise SOTD :)

Thanks too, @Antonio and @Neil for your kind words and appreciation :)

Gorgeous capture Albert,perfect for the World ocean day Danièle,congrats and thanks for sharing

Congratulations Albert, your amazing Montipora coral has been chosen as Spotting of the Day on World Oceans Day:

"As we celebrate World Oceans Day today we are reminded of the critical role that oceans and marine ecosystems play in our biosphere. We've chosen this day to bring attention to Hope Spots, ecologically unique ocean areas designated for protection under a global conservation campaign overseen by Mission Blue, a non-profit organization founded by American marine biologist Sylvia Earle. One such spot is the Coral Triangle, a coral and mangrove rich area east of Borneo, where our Spotting of the Day was made. This impressive cabbage coral swarming with marine life belongs to the genus Montipora, the second most species rich coral genus. Several Montipora species are on the IUCN Red List of Threatened Species. In as little as 1.6% of the planet’s oceanic area, the fragile Coral Triangle is home to 76% of all known coral species in the world.
To learn more about the Coral Triangle: https://buff.ly/2J6lVAp "