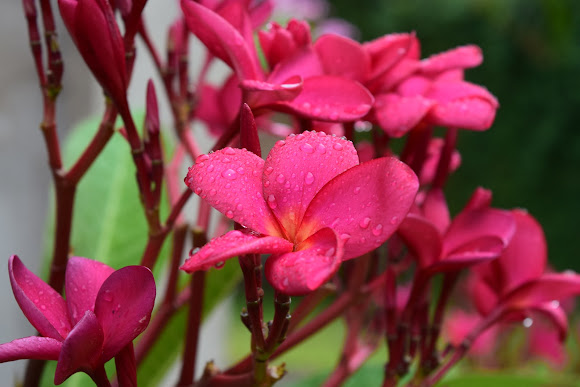 Plumeria rubra grows as a spreading shrub or small tree to a height of 2–8 m (20–25 ft) and similar width. It has a thick succulent trunk and sausage-like blunt branches covered with a thin grey bark. The branches are somewhat brittle and when broken, ooze a white latex that can be irritating to the skin and mucous membranes. The large green leaves can reach 30 to 50 cm (12–20 in) long and are arranged alternately and clustered at the end of the branches. They are deciduous, falling in the cooler months of the year. The flowers are terminal, appearing at the ends of branches over the summer. Often profuse and very prominent, they are strongly fragrant, and have five petals. The colours range from the common pink to white with shades of yellow in the centre of the flower. Initially tubular before opening out, the flowers are 5-7.5 cm (2–3 in) in diameter, and only rarely go on to produce seed - 20-60 winged seeds are contained in a 17.5 cm (7 in) pod. Some forms in cultivation are hybrids between this species and Plumeria obtusa; these have rounded rather than pointed leaves and are less likely to be deciduous. The white and yellow cultivar "Singapore" flowers all year round in Hawaii.

Its native range extends from central Mexico south through Central America to Colombia and Venezuela in South America. It is cultivated in the tropical regions of the world, and is perhaps naturalised in some parts of India