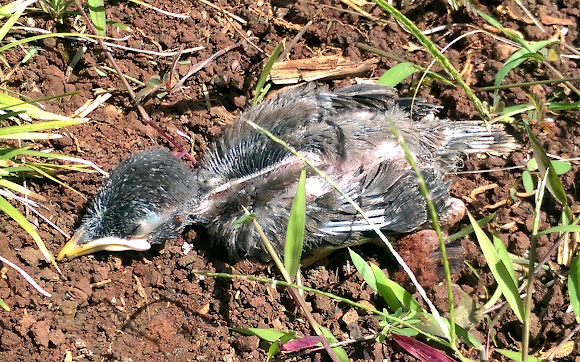 Spotted, while out walking the granddog, in distress on the ground at the edge of a landscaped area beneath a tall palm tree (image 1 and "A" in image 2). Nearby was a dead nestling of the same species ("B" in image 2) and the remains of their nest. If I read the signs properly, tree trimmers dislodged the nest and its occupants when they removed fronds from the palm tree (the nest was within debris from the crown of the tree). Even though mynah birds are invasive, I figured that wasn't the nestling's fault and decided to see if I could nurture it until it fledged. I put it, atop the remnants of its nest (less its dead sibling), into a plastic bucket, and took it home (image 3). I believe its taken some water, but not much food, so the eventual outcome is in doubt. In the near term though, the nestling has been a source of interest both to my two-year-old granddaughter, who asked --smart girl--"Where's its mommy?", and to the granddog (image 4) who, apparently not considering the nestling as prey, made no attempt to eat it.

FINAL UPDATE: Three weeks to the day since I rescued this bird, it flew off without so much as a backward glance, and has not been seen since. Boa sorte!

UPDATE 2: 15 days on and the bird is still alive, still hungry (image 6, just uploaded), still chirps, nay squawks. It now spends its days in a fenced yard, walks, hops and tries to fly, can't yet. Yesterday I took it outside, to see what it would do. It looked around and then walked, hopped and flapped after me as I retreated into the yard. Hopefully it will leave "home" eventually.

It has been very interesting to follow your progress with this little bird. I sincerely hope it comes out well, and you achieve what you are looking for. Congratulations, your's is a very nice and positive action.

UPDATE: Forty-eight hours into the mission and the nestling is still alive (image 5, just uploaded), still eating vigorously--and soiling the nest, as birds do. It now stands and preens--and of course chirps.

Karen - Thanks for the suggestion and the link. I shall shortly attempt to acquire some of the recommended dietary items. Meanwhile, a little more than a day into being a parent again, my baby is still alive, and actively and enthusiastically asking for and taking food which, at this point is exclusively juk (congee), a rice porridge which also contains bits of chicken, carrot and spinach. I was going to try to feed it a small, nearly-dead roach this morning, but I dropped it (the roach, not the "baby"!) without noticing, in an area of leaf litter where seeing/finding it again would have been "mission impossible." Nevertheless, this is the tropics. There are insects. I'll find another.

From a website that has better info than mine: http://www.quora.com/What-should-be-fed-...

Where are you? Try feeding it small bits of very moist dog food . Pet stores may also have live mealworms.