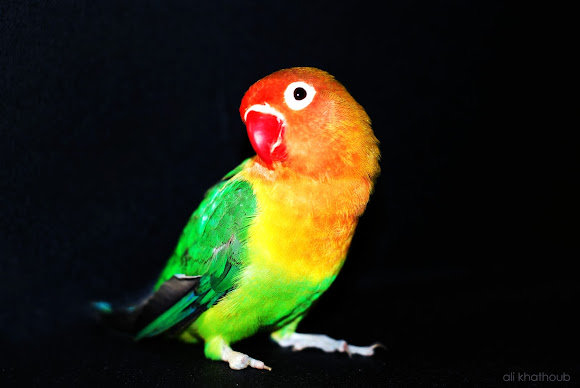 The Fischer's Lovebird is a small parrot species of the Agapornis genus. They were originally discovered in the late 19th century, and were first bred in the United States in 1926. They are named after German explorer Gustav Fischer.

Fischer's Lovebird are native to a small area of east-central Africa, south and southeast of Lake Victoria in northern Tanzania. In drought years, some birds move west into Rwanda and Burundi seeking moister conditions. They live at elevations of 1,100-2,200m in small flocks. They live in isolated clumps of trees with grass plains between them. The population is estimated to be between 290,000-1,000,000, with low densities outside of protected areas due to capture for the pet trade; export licenses were suspended in 1992 to halt any further decline in the species.

True, thankyou for sharing your point of views here. Next time I will consider your points. Thanks again. Cheers.

i feel really bad for the bird.the guy who sells it probably makes a buck or too,but he puts the bird thru so much. Let us hope there is an happy ending.
I know of a person in Bombay whose love birds that escaped ,were caught in mid air by an eagle in front of her very own eyes,in a fraction of a second. She has been traumatized by the experience.

Hey Karen, I am well aware of that fact. This bird was in a very ill condition. You will come to know it if you look at it legs. Not only that. The guy who wanted to sell didnt bother about this. I myself, didnt wana to have animals caged, so i thought the best thing to do is to freely let it go aft it healed. Furthermore there are lotsa ringneck parakeets and some species of lovebirds locally found in Sri Lanka.

Hi Khathoub, do you know if this was a captive bred bird or one captured from the wild? Just as you should never take an animal from the wild to keep as a pet, you should also not release any captive bred animal into the wild, as they may not have the necessary skills to survive, & may also introduce diseases into the wild population. This species is native to Africa so sadly it is very unlikely to thrive in Sri Lanka.

its not a pet anymore.. :) hopefully it will be somewhere around, enjoying the nature.

It should be categorized as pet and not bird.Thanks! :)

not a pet.. just a lovebird i bought to free it from being caged.. thanks guys..

is this a pet?