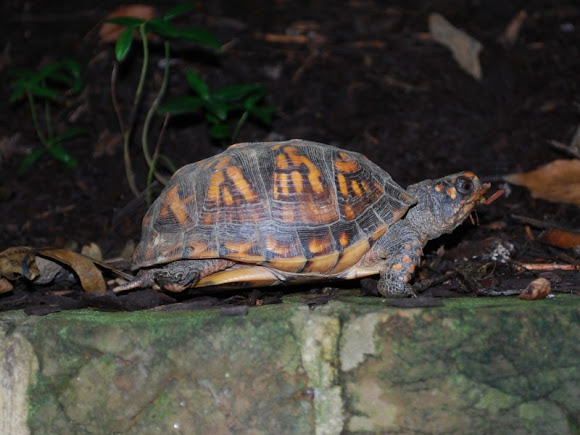 This common turtle can have a carapace length of about 6" (15 cm). They are usually brown or black with radiating yellow markings on each scute. The scales on the turtle's body may be yellow, orange, or reddish. Box turtles are called box turtles because they can withdraw their arms and legs, tail, and head into their shell and close up tightly. A hinge on the plastron allows them to do this. Males have a concave plastron, reddish eyes, and the cloaca is closer to the tip of the tail.

Box turtles are the most terrestrial of any turtle in West Virginia and Virginia. They are most often encountered during spring or summer after a rain shower. They are active during the day, wandering through forests or old fields in search of food -- earthworms, berries, mushrooms, etc. During the fall, box turtles move to valleys where they bury themselves under the soil or leaf litter. They hibernate in a shallow burrow in the soil. Like wood frogs and several other reptiles and amphibians, box turtles can survive freezing! Very cold periods during the winter may kill some turtles though.

This little tortoise visited my house during summer a couple years ago. It was just after a quick rain, and it was the first and last time I saw a turtle around here.