Shrimp of the Woods 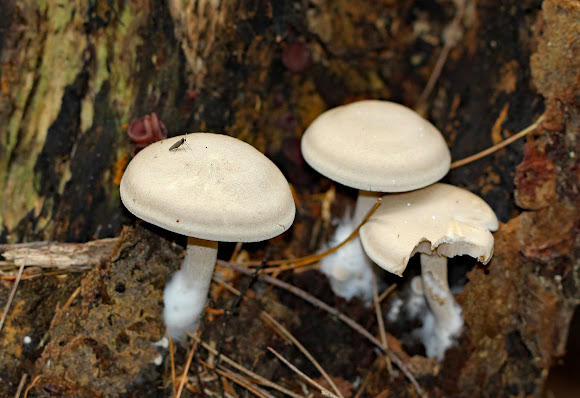 This is the unaborted form of Entoloma abortivum. The caps were dry, bald, white-gray, and had a slightly inrolled margin. The gills were white-gray, close, and attached to the stem. The stem was finely hairy, had an enlarged base, and white basal mycelium.

Growing at the base of a rotting tree in a mixed forest with Armillaria mushrooms not far off.

The aborted form of this species looks like an irregular blob that is whitish brown outside with white and pink areas inside. For years, it was thought that the aborted forms of Entoloma developed in response to being parasitized by Armillaria species. But, research indicates that the relationship is the other way around: Entoloma is the parasite and the aborted structures are actually Armillaria.