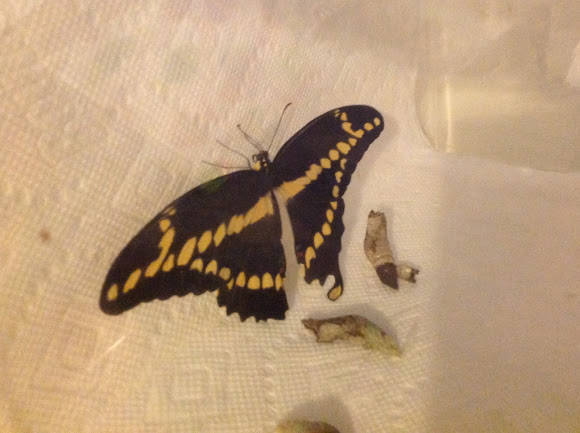 The Giant Swallowtail, is a swallowtail butterfly, common in various parts of North America, and marginally into South America ( Colombia and Venezuela only ). In the United States and Canada, it is mainly found in the south and east. It has a wingspan of about 3.9 - 6.3 inches. It is the largest butterfly, in the United States and Canada. Common name: Giant Swallowtail, Orange Dog, or Orange Puppy. The body and wings, are dark brown to black, with yellow bands. There is an "eye", in each wing tail. The abdomen has bands of yellow, along with the previously mentioned brown. The mature caterpillar, resembles bird droppings to deter predators, and if that doesn't work, they use there orange osmeteria. These are 'horns', which they can display and then retract. The coloration is dingy brown, and or olive with white patches, and small patches of purple. Citrus fruit farmers, often call the caterpillars, orange dogs or orange puppies, because of the devastation they cause, to there crops. Some of the larval food plants are: Rutaceae species, such as - citrus, Zanthoxylum americanum, Ptelea trifoliata, and Ruta graveolens. In the United States, P. cresphontes is mostly seen in deciduous forests, and citrus orchards, where they are considered a major pest. They fly between May and August, where there are 2 broods in the north, and 3 broods in the south. Adult females, lay there eggs singly on the surface of the host plant. This egg, is bright orange, and darkens with time. The caterpillars, then eat and grow, to about 2 inches, before changing into a chrysalis. The chrysalis stage is variable, but usually takes approximately 10 - 12 days, although in the fall, they may stay in the chrysalis stage overwinter, and emerge in the spring. Giant Swallowtails, fly from late May - August, but in some areas of the southern United States, such as Texas and Louisiana, they may be seen, as late as October. All giant swallowtails, have a distinctive flight pattern, which generally looks as if they are "hopping" through the air. Giant Swallowtails in general, fly fast and high, and can be difficult to capture..

Deciduous forests and citrus orchards. Adult swallowtails, fly in open areas ( fields, vacant lots, meadows, open forests, sides of streams ). They also fly around there host plants, especially where there are a lot of flowers.

A friend of mine, who is also a nature lover, gave me 3 GST pupae, to take home with me, and then wait for the pupae to eclose. I went to the store, and I bought me a small animal terrarium, to put my 3, GST pupae in. After waiting, for one and a half weeks, one GST pupa had eclosed, into a beautiful, large, Giant Swallowtail Butterfly. I will wait 4 hours, then I will take this GST butterfly outside, and set it free.