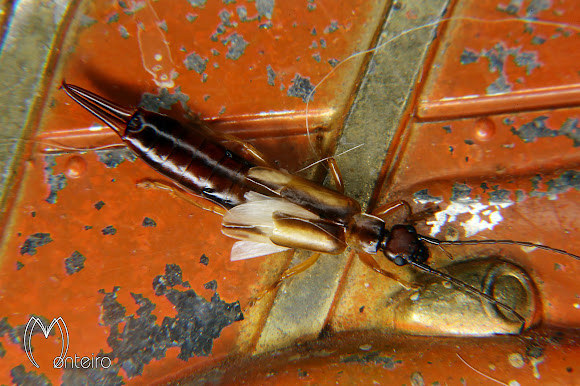 Earwigs make up the insect order Dermaptera. With about 2,000 species in 12 families, they are one of the smaller insect orders. Earwigs have characteristic cerci, a pair of forceps-like pincers on their abdomen, and membranous wings folded underneath short, rarely used forewings, hence the scientific order name, "skin wings". Some groups are tiny parasites on mammals and lack the typical pincers. Earwigs are found on all continents except Antarctica. Earwigs are mostly nocturnal and often hide in small, moist crevices during the day, and are active at night, feeding on a wide variety of insects and plants. Damage to foliage, flowers, and various crops is commonly blamed on earwigs

Found in the wall of a house in the outskirts of a small rural town.