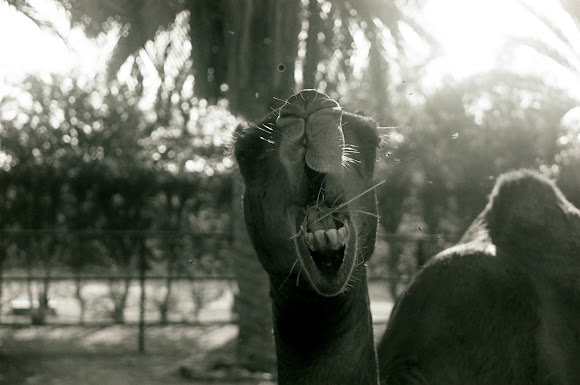 The dromedary camel (pronounced /ˈdrɑmədɛɹi/ or /ˈdrɒmədri/) or Arabian camel (Camelus dromedarius) is a large, even-toed ungulate with one hump on its back. It was first described by Carl Linnaeus in 1758. The dromedary camel is the second largest member of the camel family after the larger Bactrian camel. It feeds on foliage, dry grasses and desert vegetation. The camels are active in the day, and rest together in groups. Herds can consist of about 20 individuals. It shows no signs of territoriality, as herds often merge during calamities. They have various adaptations to help them exist in their desert habitat. Mating may occur in winter, but is peak in the rainy season.

Its native range is unclear, but it was in probably the Arabian Peninsula where it was domesticated about 4000 years ago. The domesticated form occurs widely in North Africa, South Asia and the Middle East. The world's only population of dromedaries exhibiting wild behavior is an introduced feral population in Australia.