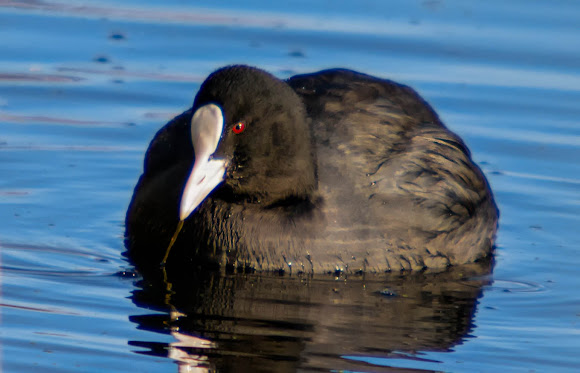 All-black and larger than its cousin, the moorhen, it has a distinctive white beak and 'shield' above the beak which earns it the title 'bald'. Its feet have distinctive lobed flaps of skin on the toes, which act instead of webs when swimming. It patters noisily over the water before taking off and can be very aggressive towards others.

At least some Coots have difficulty feeding a large family of fledglings on the tiny shrimp and insects that they collect. So after about three days they start attacking their own chicks when they beg for food. After a short while, these attacks concentrate on the weaker chicks, who eventually give up begging and die. The coot may eventually raise only two or three out of nine fledglings