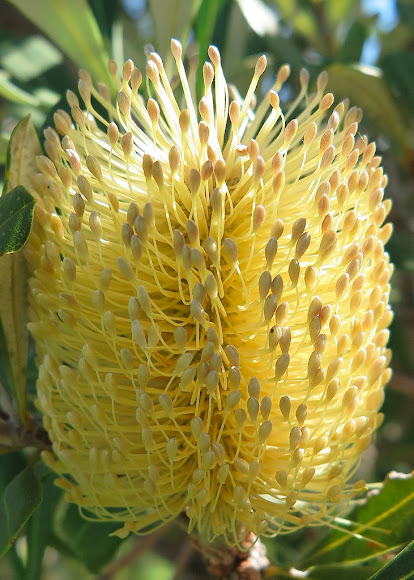 Coast Banksia is a species of tree that grows along the east coast of Australia. One of the most widely distributed Banksia species, it occurs between Victoria and Central Queensland in a broad range of habitats, from coastal dunes to mountain areas. It is highly variable in form, but is most often encountered as a tree up to 25 metres (82 ft) in height, although I've never seen one that tall. Its leaves have dark green upper surfaces and white undersides, a contrast that can be striking on windy days. The flowers are magnificent, and this spotting shows various stages of the flowers development from bud to seed cone.

Spotted at Point Lookout on North Stradbroke Island. Exposed headland area with native vegetation, extreme winds (at times), salty air, and sandy soil. Full all-day exposure to the sun. Naturally seeded trees, and quite prolific on this part of the island.

May Gibbs, an Australian author, wrote a series of children's books called Snugglepot and Cuddlepie, the first book in the series published in 1918. Snugglepot and Cuddlepie, the gumnut babies, are the protagonists of the story and are modelled on the appearance of young Eucalyptus (gum tree) nuts. The villains are the Banksia Men which are modelled on the appearance of aged Banksia 'cones', with follicles for eyes and other facial features. The last photo in this series shows the Banksia Men (which really could be one of any number of Banksia species). http://en.wikipedia.org/wiki/Snugglepot_...