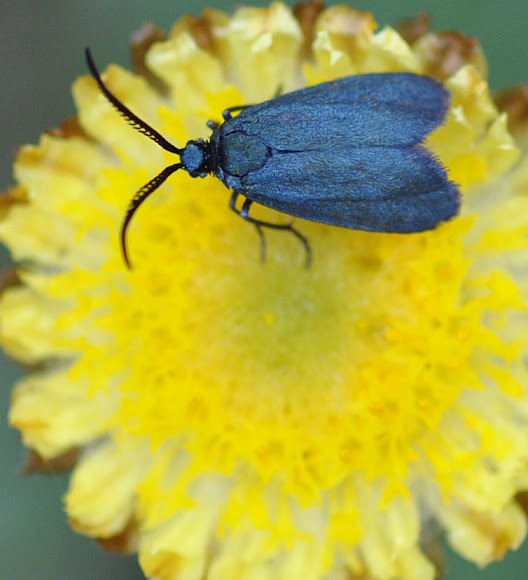 The Satin-Green Forester (Pollanisus viridipulverulenta) is a moth of the Zygaenidae family. The length of the forewings is 11–13 mm for males and 8–9 mm for females. The wingspan is about 30 mm. Adults are metallic blue-green. Adults are on wing from August and early September (in Queensland and South Australia) to January (in Tasmania). The larvae feed on various Hibbertia species (Guinea flowers), including Hibbertia obtusifolia, Hibbertia stricta and Hibbertia sericea. It pupates in a cocoon amongst the foliage or in the ground litter at the foot of the host plant. Adult moths are day-flying, and can be found feeding during the hottest hours of the day. Mating takes place in the afternoon and lasts until the following morning, and following this the female lays eggs on the host plant.

It is found in the eastern part of Australia (Queensland, New South Wales, Australian Capital Territory, Victoria, South Australia and Tasmania). This one was feeding on a Common everlasting (Chrysocephalum apiculatum).

Zygaenidae moths are mainly tropical, but this species is found in Temperate Tasmania. This is the smallest one I've seen, at most 8mm long (excluding antennea).

This one was more accommodating than most. Tried getting a photo of another one earlier in the walk, but got bitten by a jack jumper while focusing camera. Needless to say, that photo didn't come out.

Great. I haven't been able to snap one of these yet - I think they see me coming every time.