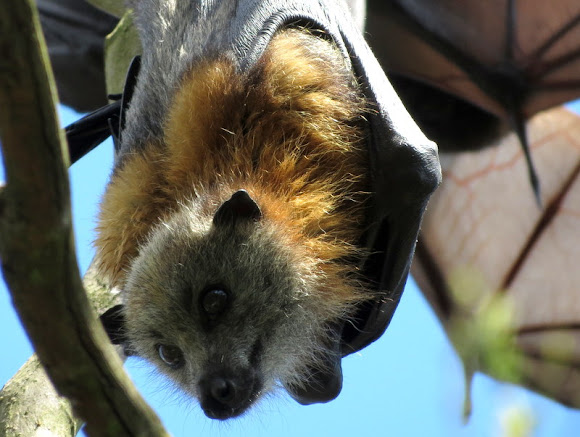 The grey-headed flying fox is the largest bat in Australia. It is tailless with claws on its first and second digits. It relies on sight to locate its food (nectar, pollen and native fruits) and thus has large eyes. The flying fox has a dark grey body with a light grey head and a reddish-brown neck collar of fur. It is unique among bats of the genus Pteropus in that fur on the legs extends all the way to the ankle.

In 1986 a colony of Grey-headed Flying-foxes took up permanent residence in the Royal Botanic Gardens. Up to 6,000 individuals roosted in the Gardens year-round, with the number increasing to 20,000 during the breeding season. In 2002 the Grey-headed Flying-fox colony was distributed over approximately 30% of the Royal Botanic Gardens and was damaging heritage-listed vegetation. Particular areas, such as Fern Gully and surrounding trees, could not withstand the stress of continual use by large numbers of Flying-foxes which stripped branches of their leaves and killed some trees. Grey-headed Flying-foxes will always be attracted to Melbourne because of the high quality of food resources it provides. It was therefore agreed that a long-term, sustainable plan for the Flying-fox colony needed to be developed. The plan needed to protect the Royal Botantic Garden’s historic plantings while providing an acceptable campsite for the Flying-foxes. In March 2003 a large-scale dispersal program was successful in relocating the colony to a more suitable location at Yarra Bend Park, Kew. The criteria used in assessing the suitability of sites were: distance from the Botanic Gardens; the amount of shelter available; the structure of the overstorey vegetation; the understorey microclimate; size of the area; potential for expansion; impact on and distance from human use; current site use; security and services available to the site.

My favourite creatures in the world, Nice series. They are like flying puppies!

beautiful series! really like the first and last shots :)

AMAZING SERIES!
And they are so adorable!

Thanks Karen. Those sneaks have done a good job of keeping this quiet here. The current Qld government won't last more than one term.

I don't think they are allowed to do that !!. but - there's a lot of people who want them culled somehow. The situation is that in more 'natural' times they were taken for food by indigenous peoples and aren't now... also because of 'modern' farming practices they are now in huge numbers that never would have been seen naturally. So their numbers are at unnaturally high levels.

I thought I read somewhere recently that Australia has been allowing people to kill fruit bats.... I was horrified! I need to find that article again. I would love to know if it's true or not.