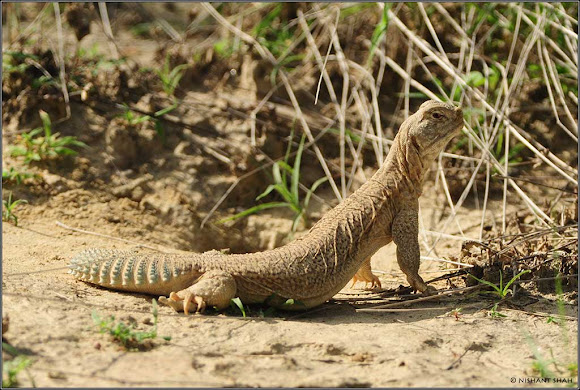 Hardwicke's or Indian spiny-tailed lizard (Uromastyx hardwickii) is a species of agamid lizard patchily distributed in arid zones in India and Pakistan. They are mainly herbivorous and live in colonies of large numbers in some areas. The spiny-tailed lizard usually lies basking near the entrance of its burrow and is very alert. They attract raptors and other predators as food. Due to a false belief that the fat extracted from it is an aphrodisiac they are hunted by locals and kept in captivity by the cruel practice of dislocating the backbone. Uromastyx hardwickii is on the verge of extinction due to poaching.