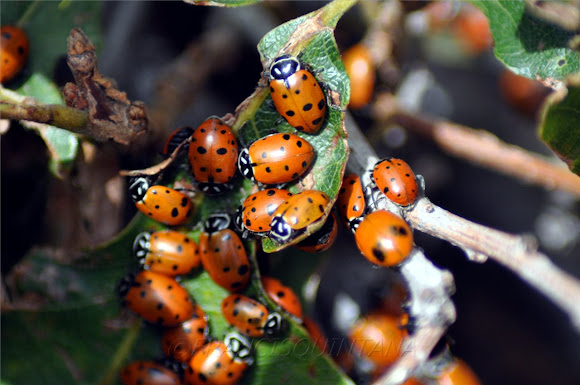 Lady beetles belong to the family Coccinellidae and the order Coleoptera. There are about 450 species native to North America. There are over 5000 species worldwide. Lady beetles are small insects between 1/32-inch and 5/8-inch long. They can be either shiny and smooth or hairy. Their elytra (wing covers) are usually brightly colored orange, yellow, or reddish, with small black spots. Lady beetles are almost hemispherical in shape, like half of a pea. They have chewing mouthparts. The small head is turned downward and the legs are short. Head, legs, and antennae are black. Larvae (grubs) are warty or spiny and dark colored. Pupae may look like bird droppings. Convergent Lady Beetles are 1/4-inch to 3/8-inch long. The pronotum (area just behind the head) is black with a white border and 2 converging white stripes. The elytra are red or orange with 13 black spots. Sometimes the spots are large forming 3 transverse bands.

Convergent Lady Beetles are native to North America. They live in woods, meadows, and gardens. They occur in great numbers in the mountains and fly to valleys in February or March. Most of the lady beetles east of the Rocky Mountains were introduced from other places. Lady beetles are found on foliage throughout the world. In the fall they sometimes fly into houses looking for places to spend the winter. Huge swarms fly into mountain canyons in the West where they spend the winter under leaves. They return to the valleys in the spring. Lady beetles are the official state insect of Delaware, Massachusetts, New Hampshire, New York, Ohio, and Tennessee.

In winter Ladybird Beetles group together to seek shelter in crevices or under bark, where they survive until springtime. In California, millions of ladybirds can be found in crevices or under bark. By December, they can be brushed into boxes where they are kept chilled until spring. They are shipped to buyers who release them in gardens or orchards to eat pests. Large clusters of Multicolored Asian Lady Beetles usually hibernate in manmade structures. They leave a bad odor and sometimes bite. They are considered a nuisance pest. In the Middle Ages, European ladybirds were called “Beetles of Our Lady” because they protected the vineyards from harmful insect pests. At the end of the grape harvest, growers set fire to the dying vines. A children’s nursery rhyme warns the beetles to fly away home to safety.

They leave a bad odor and sometimes bite.

Yes, PerilsOfPlastic it is an amazing scene! The boulders and scrub oak were covered!

the number seems to be countless!!

Convergent Lady Beetles are native to North America. They live in woods, meadows, and gardens. They occur in great numbers in the mountains and fly to valleys in February or March.

Yes..that is something to be proud of Francis!

Adarsha B S, I've seen pictures of this but now I have my own spotting of the event!

Thank you for the comment Adarsha B S, it was a thrilling find!

Loved it! Whole family u got there!

Thank you for the comment Jolly Ibanez, yes, it was quite amazing to see so many at once. We were on a hike and when we stopped to rest we spotted these ladybugs covering the bushes and boulders!

Beautiful. Never have seen this much ladybird together before.