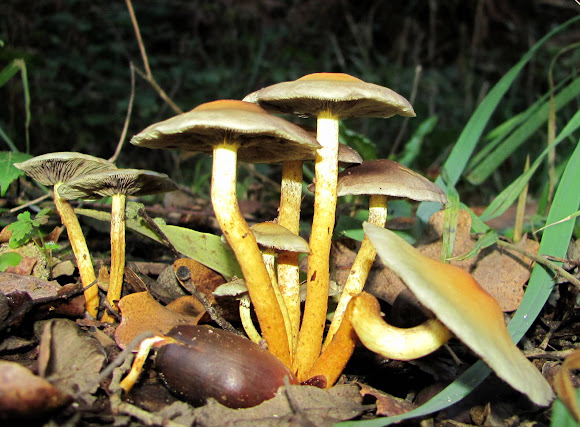 Hypholoma fasciculare, commonly known as the sulphur tuft, sulfur tuft or clustered woodlover, is a common woodland mushroom, often in evidence when hardly any other mushrooms are to be found. This saprophagic small gill fungus grows prolifically in large clumps on stumps, dead roots or rotting trunks of broadleaved trees. The "Sulphur Tuft" is bitter and poisonous; consuming it can cause vomiting, diarrhea and convulsions. The principal toxic constituents have been named fasciculol E and fasciculol F. The hemispherical cap can reach 6 cm (2⅓ in) diameter. It is smooth and sulphur yellow with an orange-brown centre and whitish margin. The crowded gills are initially yellow but darken to a distinctive green colour as the blackish spores develop on the yellow flesh. It has a purple brown spore print.[3] The stipe is up to 10 cm (4 in) tall and 1 cm (⅓ in) wide, light yellow, orange-brown below, often with an indistinct ring zone coloured dark by the spores. The taste is very bitter, though not bitter when cooked, but still poisonous.

Hypholoma fasciculare grows prolifically on the dead wood of both deciduous and coniferous trees. It is more commonly found on decaying deciduous wood due to the lower lignin content of this wood relative to coniferous wood. Hypholoma fasciculare is widespread and abundant in northern Europe and North America. It has been recorded from Iran,[4] and also eastern Anatolia in Turkey.[5] It can appear anytime from spring to autumn

It has been used successfully as an experimental treatment to competitively displace a common fungal disease of conifers, Armillaria solidipes, from managed coniferous forests Symptoms may be delayed for 5–10 hours after consumption, after which time there may be diarrhea, nausea, vomiting, proteinuria and collapse. Paralysis and impaired vision have been recorded. Symptoms generally resolve over a few days. The autopsy of one fatality revealed fulminant hepatitis reminiscent of amatoxin poisoning, along with involvement of kidneys and myocardium. The mushroom was consumed in a dish with other species so the death cannot be attributed to sulfur tuft with certainty spotted in a mix forest 5km from my house,near Tibães monastery it look like a "open egg" seened from top

I agree with Lars on this one, it's the Sulphur tuft (Hypholoma fasciculare)

Thanks Pouihi,i'am completely emerged in mushroom photos to edit and upload,it's amazing how i was blind(before noah:) to this "explosion" of life all over it's a question of haved the eyes focus :)
Emma thanks i only remark that detail at home when edint the photos ,it's one of my prefered seeds :) i remember allways with nostalgie your seed mission :( :)

lovely composition. I love the Acorn under the mushrooms.
Every time I go up hiking on Mt Diablo. I bring some Acorns for the Fox Squirrels in my backyard!

Thanks Lars :) i'll id him latter