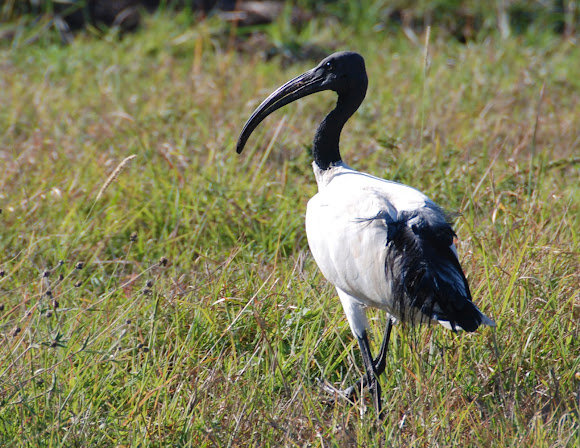 An adult individual is 68 cm long with all-white body plumage apart from dark plumes on the rump. The bald head and neck, thick curved bill and legs are black. The white wings show a black rear border in flight. Sexes are similar, but juveniles have dirty white plumage, a smaller bill and some feathering on the neck. - Wikipedia

A wading bird of the ibis family, Threskiornithidae, the Sacred Ibis breeds in sub-Saharan Africa, southeastern Iraq, and formerly in Egypt, where it was venerated and often mummified as a symbol of the god Thoth. The African Sacred Ibis occurs in marshy wetlands and mud flats, both inland and on the coast. It will also visit cultivation and rubbish dumps. - Wikipedia