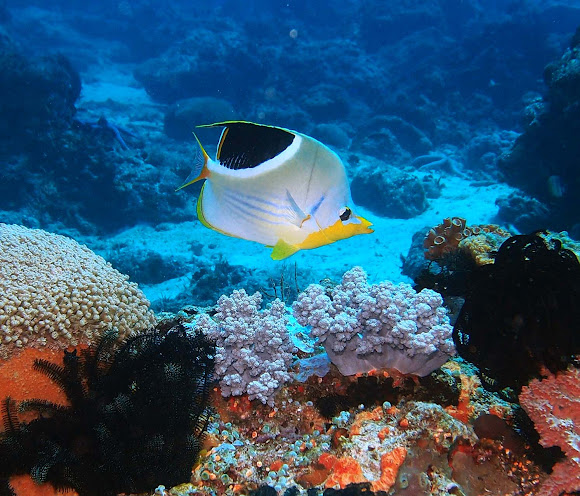 Is a species of butterflyfish (family Chaetodontidae). It is a large butterflyfish, at up to 30 cm (nearly 12 in) long together with the Lined Butterflyfish (C. lineolatus) the giant among its genus. In shape it resembles certain angelfishes more than most of its relatives. The overall color is yellowish grey, with a large black spot bordered below by a broad white band on the back and wavy blue lines on the lower sides. The throat and the outline of the hind parts is bright yellow. Adults have a filament extending posteriorly from the upper part of the soft portion of the dorsal fin.

It is found in the Indian and Pacific Oceans from Sri Lanka and the Cocos-Keeling Islands to the Hawaiian, Marquesan and Tuamoto islands, north to southern Japan, south to Rowley Shoals and New South Wales in Australia. The Saddle Butterflyfish is found at depths between 0 and 30 m in coral reefs. It feeds on filamentous algae, small invertebrates, coral polyps, and fish eggs.