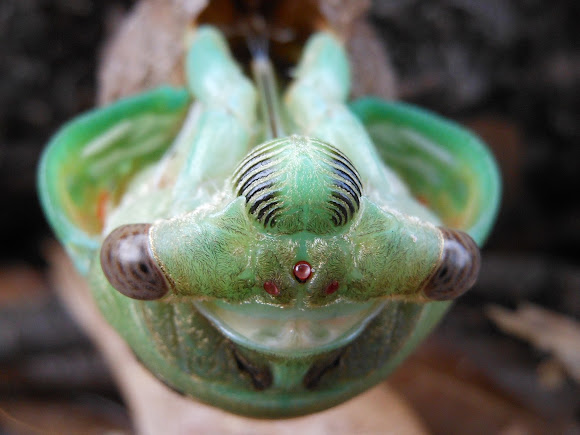 I watched the entire molting process as it occurred over a period of around two hours. After having positioned itself slightly above the ground on a log, a vibrant green head began to emerge, slowly, from the organism's distastefully brown exoskeleton. Soon, it was completely free of its old "skin", and I watched as it uncurled its wings, in preparation for what it had been waiting for all those years underground - its chance to mate. Truly a wonderful sight.

In the swamps of Louisiana. In particular, this one was found alongside a slow-moving river, crawling toward a fallen limb so as to begin the molting process.

It was quite vulnerable to ant attack while molting, thus I had to stand guard and assure that things went according to the insect's little plan. It did not produce the distinct cicada sound, but perhaps that would take place later, for I had to continue down the river via kayak shortly after the exoskeleton was shed. Here is a good example of the molting process: http://en.wikipedia.org/wiki/File:Cicada...

You might also want to consider T. resh.
I strongly suspect this is resh.

I have seen a lot of T. resh in the Lake Charles area (esp. around the big Live oaks), but only heard a few T. pronotalis just to the north and west nr. Sulphur (beyond the marsh lands).

T. pronotalis is most often associated with Cottonwoods & Willows.

A belated congratulations on this SOTD!

this is a great shot, indeed!

It looks like the face of Chinese guardian lion :) Congratulations again Caleb!

Congratulations Caleb on this wonderful spotting and SOTD!

Wow!! I'm honored, truly. There will definitely be more where this came from. Thanks everyone (and to you especially, Mr. Antonio - indubitably helpful is your comment), and Project Noah, for the recognition and praise.

great begining Caleb,congrats,thanks for sharing and welcome to Project Noah :)
I hope you like the site and the community as much we do,there are many features you can explore,the chats for questions and comments on your's and other's spottings and to elp you in the ID process,a blog wich link is in the base of the page,where you can find articls about wildlife writen by our best's specialist's in each field and news about some of our most knowed users.
Normaly spottings are adeed to missions to make easier the acess to other user's,the missions button is on the top of the page there you can find the ones fits better in your case,attention to the range of each mission,there are missions that haved a global name but are local,so you have to see the map of the mission and their you have the range of the mission marked,if is in your residential area ist' good,them there are global missions that you can join freely.For furder info you shoul go to FAQ link that is also in the base of the page
Enjoy your self,see you arround :)

1st spotting and an SOTD! congrats!

very nice picture.....The Cicadas here in an Borneo rarely ever seen because they so high up in the trees....we can hear them, but not see them, maybe a few times fly into our house to the light bulb...