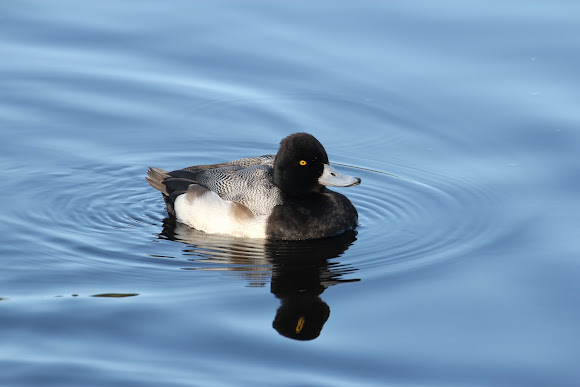 Lesser Scaup has a slightly peaked crown, smallish blue bill with a touch of black on the tip, dark purple-brown head and breast, grey back, white flanks.

Winters along the west coast of north america in sheltered bays, and small lakes like Lost Lagoon in Stanley Park, Vancouver, BC. Breeds inland Alaska and northern Canada and all across the Canadian prairies and northern US on marches, small lakes and ponds.

I am having great difficulty deciding between Greater and Lesser Scaup here but photo #2 shows the peaked head of the Lesser as it was swimming away from me. So Lesser it is!

Thanks for your help Jemma, and I added it to my mission Breeding Birds of BC as the Lesser breeds in BC but typically, the Greater does not.

HI Jemma! I just see your comment now! Yes, I had just found another photo (I added it now!) that shows the peaked head. Thanks for your input and I agree and have changed it now.

Kathleen,on comparing to this one i think that yours might be a Lesser Scaup.
http://www.projectnoah.org/spottings/161...