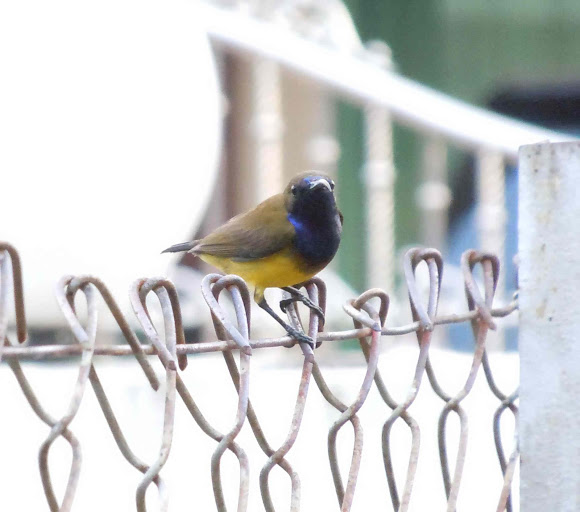 The sunbirds are a group of very small Old World passerine birds which feed largely on nectar, although they will also take insects, especially when feeding young. Their flight is fast and direct on their short wings. Most species can take nectar by hovering, but usually perch to feed most of the timeThe Olive-backed Sunbird is common across southern China to the Philippines and Malaysia down to northeast Australia. They are small songbirds, at most 12 cm long. In most subspecies, the underparts of both male and female are bright yellow, the backs are a dull brown colour. The forehead, throat and upper breast of the adult male is a dark, metallic blue-black. In the Philippines (where they are known as "tamsi")[1] the males of some subspecies have an orange band on the chest, in Wallacea and northern New Guinea some subspecies have most of the underparts blackish, and in southern China and adjacent parts of Vietnam most of the underparts of the male are greyish-white. Originally from mangrove habitat, the Olive-backed sunbird has adapted well to humans, and is now common even in fairly densely populated areas, even forming their nests in human dwellings