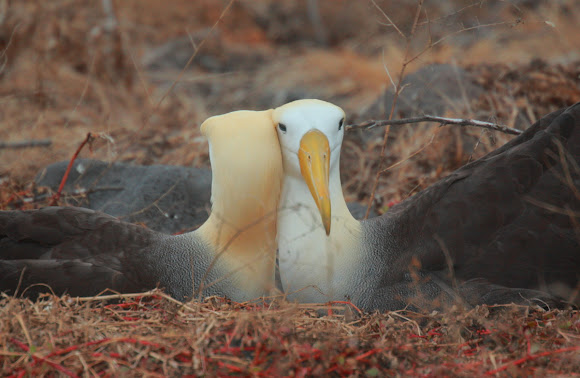 The Waved Albatross (Phoebastria irrorata), also known as Galapagos Albatross, is the only member of the Diomedeidae family located in the tropics. When they forage, the Waved Albatross follow straight paths to a single site off the coast of Peru, about 1,000 km (620 mi) distant to the east. During the non-breeding season, these birds reside primarily in the areas of the Ecuador and Peruvian coasts.

Waved Albatross are spectacular flyers, perhaps even the most famous. They can fly for hours without stalling and they do this by dynamic soaring. The wind speed near the surface of the sea is much lower than about 50 ft (15 m) in the air. The waved albatross uses this to its advantage by gliding at speed into the wind. As the Waved Albatross glides higher it loses most of its ground speed because it is gliding into a wind of a higher speed. However, its air speed does not fall, enabling it to glide continuously. However, Waved Albatrosses do have difficulty taking off and landing due to their huge wings and slender bodies. To make it easier they sometimes take off on cliffs that are more inland and not next to the coast. The problem is when they come in to land they have a high stalling speed, and when they take off it's hard to beat their massive wings