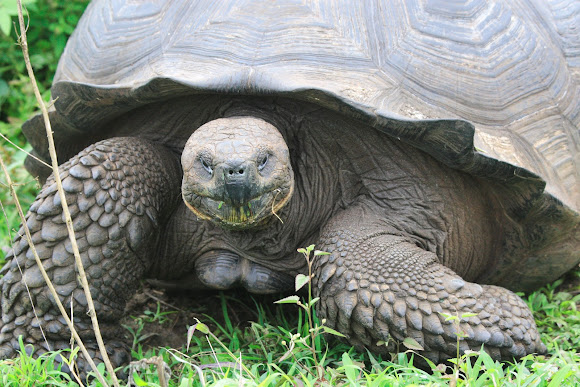 The Galápagos tortoise or Galápagos giant tortoise (Chelonoidis nigra) is the largest living species of tortoise and 10th-heaviest living reptile, reaching weights of over 400 kg (880 lb) and lengths of over 1.8 meters (5.9 ft). With life spans in the wild of over 100 years, it is one of the longest-lived vertebrates. A captive individual lived at least 170 years. The tortoise is native to seven of the Galápagos Islands, a volcanic archipelago about 1,000 km (620 mi) west of the Ecuadorian mainland. Spanish explorers, who discovered the islands in the 16th century, named them after the Spanish galápago, meaning tortoise. Shell size and shape vary between populations. On islands with humid highlands, the tortoises are larger, with domed shells and short necks - on islands with dry lowlands, the tortoises are smaller, with "saddleback" shells and long necks. Charles Darwin's observations of these differences on the second voyage of the Beagle in 1835, contributed to the development of his theory of evolution. Tortoise numbers declined from over 250,000 in the 16th century to a low of around 3,000 in the 1970s. This decline was caused by exploitation of the species for meat and oil, habitat clearance for agriculture, and introduction of non-native animals to the islands, such as rats, goats, and pigs. Ten subspecies of the original fifteen survive in the wild; an eleventh subspecies (C. n. abingdoni) had only a single known living individual, kept in captivity and nicknamed Lonesome George until his death in June 2012. Conservation efforts, beginning in the 20th century, have resulted in thousands of captive-bred juveniles being released onto their ancestral home islands, and it is estimated that the total number of the species exceeded 19,000 at the start of the 21st century. Despite this rebound, the species as a whole is classified as "vulnerable" by the International Union for Conservation of Nature (IUCN).