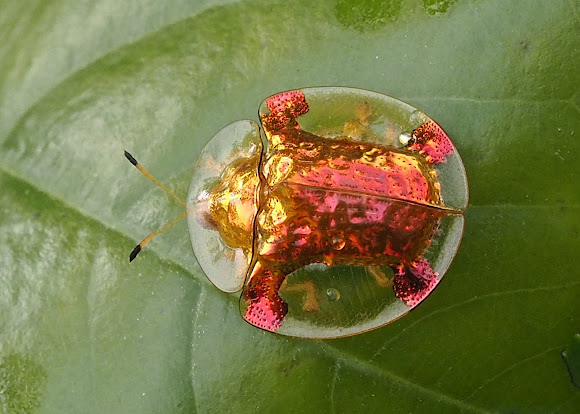 Aspidimorpha sanctaecrucis, sometimes called the Golden Tortoise Beetle (a common name which refers to other species elsewhere), is an Old World species of beetle belonging to the family Chrysomelidae, found in Southeast Asia. It is active in the rainy season, with diapause in winter and summer. Both adults and larvae feed on Convolvulaceae, mainly on Ipomoea species. I heard their colour changes from gold to red or redish brown throughout their development, during mating, and during times of disturbance, such as when it is touched by a human researcher. When I saw it from a distance it was shining a brilliant golden colour. Photo 2 was one of the first photos I took. Photo 3 was taken 2 minutes later after taking several other photos, and the 1st photo taken a minute after that. It definitely seemed to be getting more red, though not sure how much lighting influenced the colour. I saw it 2 years ago and don't remember now if it was red from the beginning. Aspidimorpha sanctaecrucis can reach a length of about 14 mm.

Bushes growing along a dirt path running alongside a tea plantation in Assam.

There are two beetle species that go by the name "golden tortoise beetle." Although they both belong to the Cassidinae subfamily of tortoise beetles, they are very different.The one pictured here is Aspidimorpha sanctaecrucis, which is endemic to Southeastern Asia. The other golden tortoise beetle, which is known scientifically as Charidotella sexpunctata, is found throughout the Americas.

thank you so much Daniele

Such interesting observations on this beauty Pam! Your spotting has been nominated for the Spotting of the Week. The winner will be chosen by the Project Noah Rangers based on a combination of factors including: uniqueness of the shot, status of the organism (for example, rare or endangered), quality of the information provided in the habitat and description sections. There is a subjective element, of course; the spotting with the highest number of Ranger votes is chosen. Congratulations on being nominated!

What a beauty, Pam. Another of those living jewels. Thanks for sharing it.

thank you harshad. I could hardly miss it... It was shining like gold in the sun !