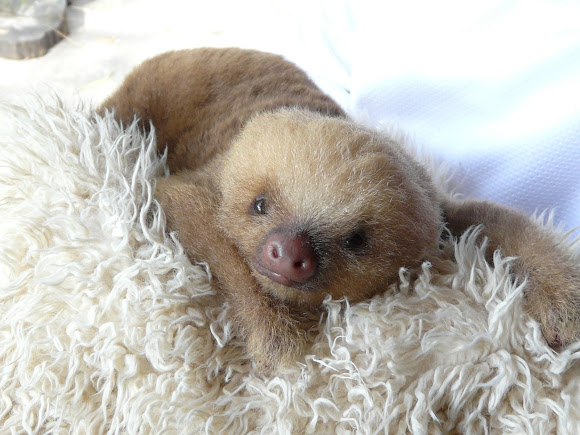 Two claws on front feet and three on rear. No tail and all four limbs are the same length. Faster moving than Three-toed Sloth and can support it's weight and crawl on the ground.

From low to mid elevations and also the highlands in wet forests. Suns itself during the day and normally feeds at night, mostly just leaves.

Paradise Gardens was a rescue/release center in Boquete, Panama that had mostly saved/injured birds & mammals. It has since closed. The furry cloth was used to replicate the mother's fur and to protect the volunteers from the strong claws while feeding/exercising this youngster.

It is so cute

Thanks, love those Toucans

What a wonderful series.
Congrats on SOTD!!
Oh, and btw....
Welcome to Project Noah!! :)

Thank you all for the nice comments.
To msb86, how can we talk?

Hi Mark! Beautiful spot! I was volunteering few years ago in Costa Rica in a Sloth Rescue Center and I didn't know that in Panama they also have a rescue center. I hace some questions for you, because I want to know your opinion abour this center in Panama. It will be cool to share our point of view about the conservation of the sloths. :)

Congratulations! You are the new father of a newborn Wookie pup!

Congratulations on SOTD. So sad to hear he/she did not survive

Congratulations Mark on the SOTD for this adorable sloth ! Very sad to hear that he (or she?) didn't survive... :"(
By the way, I think adult sloths are very cute, too! ;)

Congratulations...this little guy was a star in the making !

Congrats Mark,on the SOTD,thanks for sharing such a cute rare beauty

This is just way too cute. Thanks for sharing it with us, Mark. Congrats on a well deserved spotting of the day!

"How can you not love this adorable Hoffmann's two-toed sloth? This little guy was spotted at the Paradise Garden rescue and release center for saved or injured animals in Panama. The furry cloth was used to replicate the mother's fur and to protect the volunteers from the strong claws. Hoffmann's two-toed sloth is a species of sloth from Central and South America. Two-toed sloths spend most of their time in trees, though they may travel on the ground to move to a new tree. They are strictly nocturnal, moving slowly through the canopy for about eight hours each night, and spending the day sleeping in tangles of lianas. They move only very slowly, typically at around 0.14 metres per second (0.46 ft/s)."

so cute - I love pic #2. so sorry to hear that she/he did not survive.