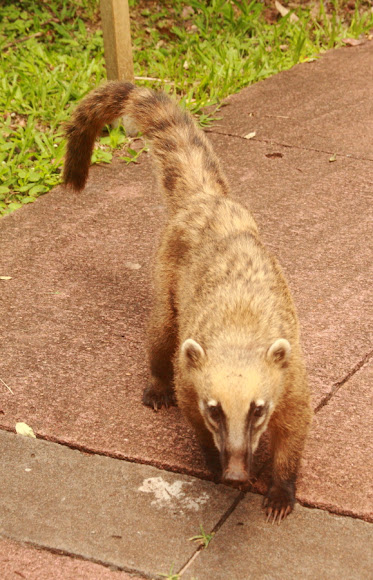 South American coatis are diurnal animals, and they live both on the ground and in trees. They typically live in the forest. They are omnivorous and primarily eat fruit, invertebrates, other small animals and bird's eggs. Coatis search for fruit in trees high in the canopy, and use their snouts to poke through crevices to find animal prey on the ground. They also search for animal prey by turning over rocks on the ground or ripping open logs with their claws. Females generally live in large groups, called bands, consisting of 15 to 30 animals. Males, on the other hand, are usually solitary. Solitary males were originally considered a separate species due to the different social habits and were called "coatimundis", a term still sometimes used today. Neither bands of females nor solitary males defend a unique territory, and territories therefore overlap. Group members produce soft whining sounds, but alarm calls are different, consisting of loud woofs and clicks. When an alarm call is sounded, the coatis typically climb trees, and then drop down to the ground and disperse. Coatis typically sleep in the trees.Predators of the South American coati include foxes, jaguars, jaguarundis, domestic dogs, and people.