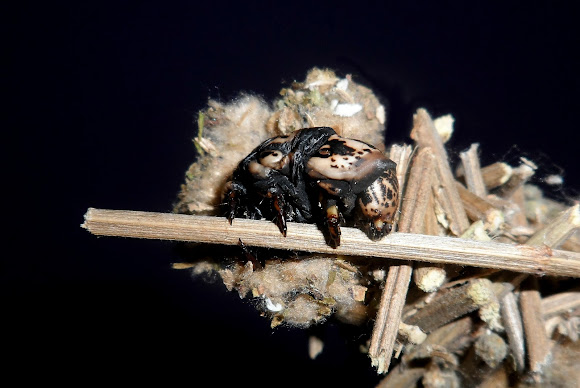 I am following a caterpillar of an Oiketicus kirbyi moth, in an attempt to record the characteristics of the pupa and the female adult. Despite being an ordinary animal, I find little information about their lifestyle and metamorphosis, and almost no image of adults. Oiketicus kirbyi are very shy and rarely expose themselves outside the shelter, doing it only when feeding themselves or when enlarging the shelter as they grow up. I did a homemade amateur video with few resources, in the desire to show how the caterpillar geniously adds small pieces of sticks (Lipia alba) to the pre-raised basket with silk only. I also did some photos of the caterpillar handling the material used. Describing only what happens in the video: Oiketicus kirbyi cuts the tip of the twig with the aid of the mouth parts. It has a sensational perception of the right measure to be trimmed, and where it will be fixed, following a sequence. After trimming the stick, it locks it loosely on the edge of the basket entrance. The next part is quite time consuming and difficult, it will open a hole through the shelter. I suppose besides her mouth parts, she also uses her legs for this. Passage made, the Oiketicus kirbyi then collects the small piece of twig, pulls it near the passage, and holds it with silk. It will not stop putting silk until the twig is firmly attached and the passage completely closed. All this work lasted about 10 to 15 minutes; it will repeat the same process several times throughout the day. Later, it will cover the new part made with silk, for greater protection.

Awesome! Congrats on the well-deserved SOTD.

Thank you so much Daniele and Project Noah. I'm happy.

Congratulations Kel and thank you so much for the detailed explanations! This unique series and video are our Spotting of the Day!

"Watch this bagworm moth caterpillar (Oiketicus kirbyi) build its case in our fantastic Spotting of the Day! A fascinating feature of bagworm moths caterpillars (family Psychidae) is their building of protective cases out of silk and added environmental materials such as sand, soil, lichen, or plant parts. Project Noah member Kel Silva lives in Brazil and is passionate about documenting the life cycle of insects, and here she takes us through the extraordinary process by which Oiketicus kirbyi adds precisely cut pieces of sticks to a pre-raised basket made of silk. Make sure to watch the video, check the spotting for more images and detailed explanations about the documented process, and share!"

Hi John! It is on Kel's personal page, and I'm not sure it's public, which is why I asked her to share her notes here for the benefit of the Project Noah community and our general public, and to make this spotting complete. I have also messaged Kel on Facebook :-)

Hi Sckel! I read about the fascinating story behind this spotting on your Facebook page. Please please add some information here as it would be great if we could feature it :-)