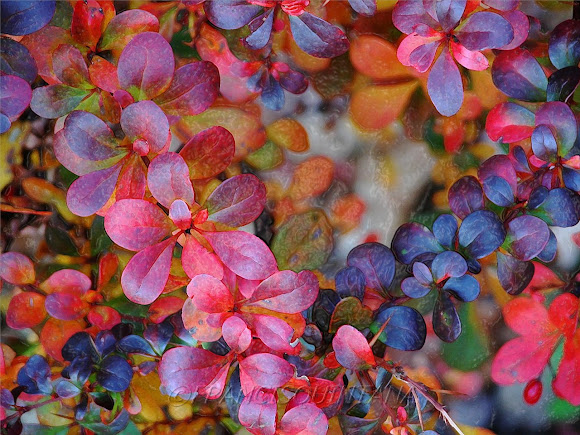 A genus of about 450-500 species of deciduous and evergreen shrubs from 1-5 m tall with thorny shoots, found throughout the temperate and subtropical regions of the world (apart from Australia). Species diversity is greatest in South America, Africa and Asia; Europe has a few species, and North America two. The most well-known Berberis species is the so-called European barberry, Berberis vulgaris, which is commonplace in Europe, the Middle East, and central Asia.

The genus Berberis is characterised by dimorphic shoots, with long shoots which form the structure of the plant, and short shoots only 1-2 mm long. The leaves on long shoots are non-photosynthetic, developed into three-spined thorns 3-30 mm long; the bud in the axil of each thorn-leaf then develops a short shoot with several normal, photosynthetic leaves. These leaves are 1-10 cm long, simple, and either entire, or with spiny margins. Only on young seedlings do leaves develop on the long shoots, with the adult foliage style developing after the young plant is 1-2 years old. Many deciduous species, such as Berberis thunbergii or B. vulgaris, are noted for their attractive pink or red autumn colour. In some evergreen species from China, such as B. candidula or B. verruculosa, the leaves are brilliant white beneath, a feature valued horticulturally. Some horticultural variants of B. thunbergii have dark red to violet foliage. The flowers are produced singly or in racemes of up to 20 on a single flower-head. They are yellow or orange, 3-6 mm long, with six sepals and six petals in alternating whorls of three, the sepals usually coloured like the petals. The fruit is a small berry 5-15 mm long, ripening red or dark blue, often with a pink or violet waxy surface bloom; in some species, they may be either long and narrow, but are spherical in other species. The genus Berberis is closely related to the genus Mahonia, which is included within Berberis by some botanists.

Berberis species are used as food plants by the larvae of some Lepidoptera species, including a moth, the Mottled Pug. Berberis vulgaris (European barberry) and Berberis canadensis (American barberry) serve as alternate host species of the wheat rust fungus (Puccinia graminis), a grass-infecting rust fungus that is a serious fungal disease of wheat and related grains. For this reason, cultivation of B. vulgaris is prohibited in many areas, and imports to the United States are forbidden. The North American B. canadensis, native to Appalachia and the Midwest United States, was nearly eradicated for this reason, and is now rarely seen extant, with the most remaining occurrences in the Virginia mountains. Some Berberis species have become invasive when planted outside of their native ranges, including B. glaucocarpa and B. darwinii in New Zealand (where it is now banned from sale and propagation), and green-leaved B. thunbergii in much of the eastern United States. Several species of Berberis are popular garden shrubs, grown for such features as ornamental leaves, yellow flowers, or red or blue-black berries. Numerous cultivars and hybrids have been selected for garden use. Low-growing Berberis plants are also commonly planted as pedestrian barriers. Taller-growing species are valued for crime prevention; being very dense, viciously spiny shrubs, they make very effective barriers impenetrable to burglars. For this reason they are often planted below potentially vulnerable windows, and used as hedges.

Lovely colors, thanks for note,

Berberis thunbergii or B. vulgaris, are noted for their attractive pink or red autumn colour.