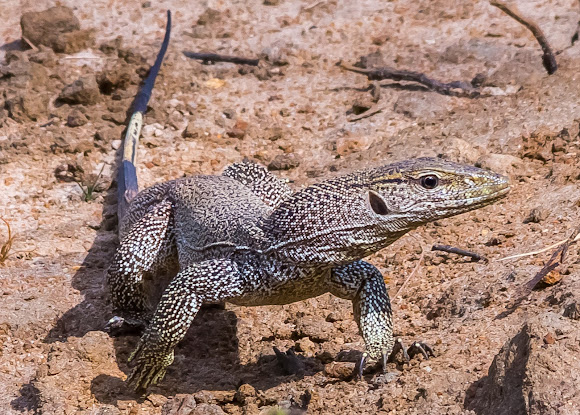 The Bengal monitor (Varanus bengalensis) or common Indian monitor, is a monitor lizard found widely distributed over the Indian Subcontinent, as well as parts of Southeast Asia and West Asia. This large lizard is mainly terrestrial, and its length can range from about 61 to 175 cm from the tip of the snout to the end of the tail. Young monitors may be more arboreal, but adults mainly hunt on the ground, preying mainly on arthropods, but also taking small terrestrial vertebrates, ground birds, eggs and fish. Although large monitors have few predators apart from humans who hunt them for meat, younger individuals are hunted by many predators. The Bengal monitor can reach 175 cm with a snout-to-vent length (SVL) of 75 cm and a tail of 100 cm. Males are generally larger than females. Heavy individuals may weigh nearly 7.2 kg.[2] The populations of monitors in India and Sri Lanka differ in the scalation from those of Myanmar; these were once considered subspecies of the Bengal monitor, but now considered two species within the V. bengalensis species complex.[3][verification needed] What was once the nominate subspecies, V. bengalensis, is found west of Myanmar, while V. nebulosus is found to the east. V. nebulosus can be differentiated by the presence of a series of enlarged scales in the supraocular region. The number of ventral scales varies, decreasing from 108 in the west to 75 in the east (Java). Young monitor lizards are more colourful than adults. Young have a series of dark crossbars on the neck, throat and back. The belly is white, banded with dark crossbars and are spotted with grey or yellow (particularly in the eastern part of the range). On the dorsal surface of young monitors, there are a series of yellow spots with dark transverse bars connecting them. As they mature, the ground colour becomes light brown or grey, and dark spots give them a speckled appearance. Hatchlings of V. nebulosus by comparison tend to have a series of backward-pointing, V-shaped bands on their necks.

coastal wetland. Bundala National Park is an internationally important wintering ground for migratory water birds in Sri Lanka. Bundala harbors 197 species of birds, the highlight being the greater flamingo, which migrate in large flocks. Bundala was designated a wildlife sanctuary in 1969 and redesignated to a national park on 4 January 1993. In 1991 Bundala became the first wetland to be declared as a Ramsar site in Sri Lanka. In 2005 the national park was designated as a biosphere reserve by UNESCO, the fourth biosphere reserve in Sri Lanka. The area mainly underlain with hornblende-biotite gneiss of the eastern Vijayan series. The low country dry zone climate prevails in the area. The area has an average relative humidity of 80%. The national park contains five shallow, brackish lagoons with salt pans in three. They are Bundala lagoon of 520 hectares (2.0 sq mi), Embilikala Lagoon of 430 hectares (1.7 sq mi), Malala Lagoon of 650 hectares (2.5 sq mi), Koholankala lagoon of 390 hectares (1.5 sq mi), and Mahalewaya of 260 hectares (1.0 sq mi). The Koholankala and Mahalewaya are almost totally developed for salt production. The climatic conditions are tropical monsoonal, with a mean annual temperature of 27 °C (81 °F). Annual rainfall ranges from 900–1,300 millimetres (35–51 in), with dry period persists from May to September. The elevation of the park ranges from sea level to 10 metres (33 ft).The park was affected by 2004 Indian Ocean tsunami. Due to protection from sand dunes the park received very little damage.

thanks so much I_munisinghe! I think most of the others are Sri Lankan Land Monitors as well, so I will change those also, but can I trouble you to check on this spotting because it looks different than the other lizards: https://www.projectnoah.org/spottings/59......
for some reason it wont show up in my unidentified posts.

This was confirmed as Land Monitor, again based on the reference I have attached, it is the same species, Varanus bengalensis, so its Bengal Monitor. I think the common name used in Sri Lanka is Land Monitor.

I'm thinking either Asian Water Monitor (Varanus salvator) or Bengal Monitor / Common Indian Monitor (Varanus bengalensis)? My guide called it a Land Monitor, but I find no wiki reference to that.