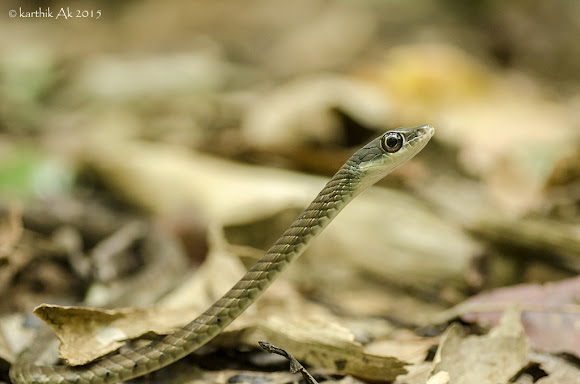 It was a cool sunny day. The forest floor had little bit of moisture from the rains a week back. As we walked along the path filled with leaf litter, one of my accomplice stopped and said, a snake! over there! It was an endemic species of tree snake. It was right in front of us, a few feet from us. It was stunned like a statue, it was not moving. Its entire body was flat. It had transformed into a dry stick. I went close without making sudden movements and took some images. And from no where a frog jumped across the snake, the snake's head turned towards it. Then we thought there might be some drama. The frog leaped again and went further, the snake started chasing it, but before we could spot the frog and snake, both had disappeared into the leaf litter. The snake would have had his meal for sure!! The perfect camouflage and lightening fast movement made us loose the sight!