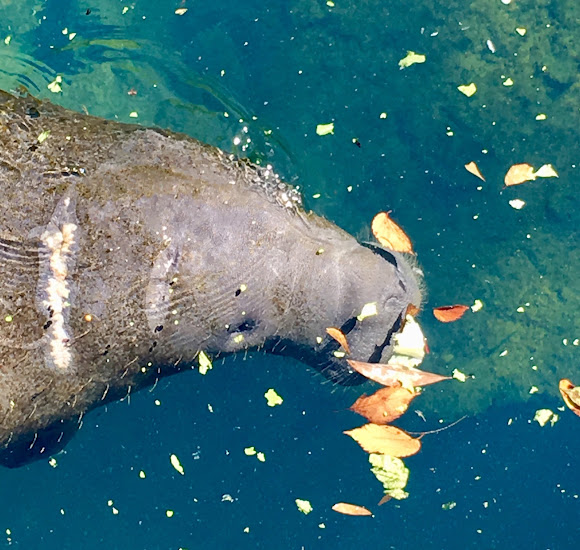 The West Indian manatee (Trichechus manatus) or "sea cow", also known as American manatee, is the largest surviving member of the aquatic mammal order Sirenia (which also includes the dugong and the extinct Steller's sea cow). Like the other sirenians, the West Indian manatee has adapted fully to an aquatic life style, having no hind limbs. Pelage cover is sparsely distributed across the body, which may play a role in reducing the build-up of algae on their thick skin. The average West Indian manatee is about 2.7–3.5 m (8.9–11.5 ft) long and weighs 200–600 kg (440–1,320 lb), with females generally larger than males. The difference between the two subspecies of the West Indian manatee is that the Florida manatee is commonly reported as being larger in size compared to Antillean manatee. This manatee's color is gray or brown. Its flippers also have either three or four nails. It is known to withstand large changes in water salinity, so has also been found in shallow rivers and estuaries. It can live in fresh, brackish, and saline water. It is limited to the tropics and subtropics due to an extremely low metabolic rate and lack of a thick layer of insulating body fat. While this is a regularly occurring species along coastal southern Florida, during summer, this large mammal has even been found as far north as Dennis, Massachusetts, and as far west as Texas.

These manatees have been rescued from the Gulf of Mexico. They were injured or orphaned. The park is their “forever” home. There are currently twelve there. In the winter months, the “residents” are put in a separate fenced off pool, while 80 to 90 manatees find their way to the springs & spend the cold months in the warm waters.

Thank you for the nomination, Ashley! :)