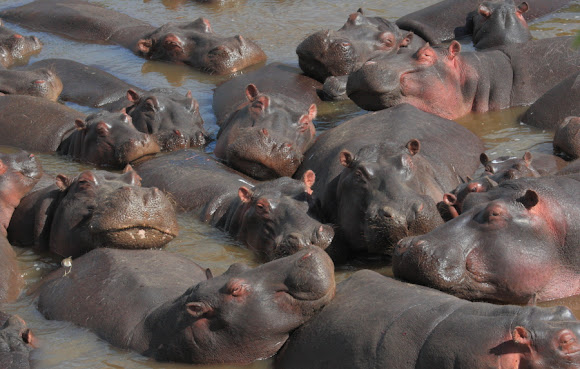 The hippopotamus is semi-aquatic, inhabiting rivers, lakes and mangrove swamps, where territorial bulls preside over a stretch of river and groups of 5 to 30 females and young. During the day, they remain cool by staying in the water or mud; reproduction and childbirth both occur in water. They emerge at dusk to graze on grass. While hippopotamuses rest near each other in the water, grazing is a solitary activity and hippos are not territorial on land. Hippos are recognizable by their barrel-shaped torso, enormous mouth and teeth, nearly hairless body, stubby legs and tremendous size. It is the third largest land mammal by weight (between 1½ and 3 tonnes), behind the white rhinoceros (1½ to 3½ tonnes) and the three species of elephant (3 to 9 tonnes). The hippopotamus is one of the largest quadrupeds and, despite its stocky shape and short legs, it can easily outrun a human. Hippos have been clocked at 30 km/h (19 mph) over short distances. The hippopotamus is one of the most aggressive creatures in the world and is often regarded as one of the most dangerous animals in Africa. They are still threatened by habitat loss and poaching for their meat and ivory canine teeth.

Great capture Cindy,congrats on the well deserved SOTD and thanks for sharing your awesome spotting page

Thank-you all for you nice comments

Awesome series of photos... congrats on the SOTD!

Thanks for the SOTD for my hippo photo. I am truly honored.

Congrats Cindy on you SOTD. Well done. Thanks for sharing the photos.

Hi Cindy, we hope you're well! Congratulations, your hippos are our Spotting of the Day for #HippoDay:

"A pod of hippos enjoys a group bath in our #HippoDay Spotting of the Day! The common hippopotamus (Hippopotamus amphibius) used to be widespread all across sub-Saharan Africa, but is now severely restricted to limited areas. Hippos continue to be threatened by habitat loss, human-wildlife conflict, and poaching for meat and teeth. Since 2006, the common hippopotamus is listed as Vulnerable on the IUCN Red List. Its decline has been particularly dramatic in the Democratic Republic of the Congo (DRC), where at the beginning of the 21st century the hippo population declined by more than 95%. Surveys carried out in the Virunga National Park in the eastern DRC and published in 2016 indicated that at the time at least hippo numbers were on the way up following increased local protection enforcement and international collaboration. Find out more here: https://buff.ly/2GqwocZ "

Another amazing series! What an incredible sight!
The hippo in the photo #4 looks just like my math teacher from high school. :)

Hippos are great to photograph. They seem like they all look alike, but when you really look closely at them they don't.
Thanks for all the nice compliments !!