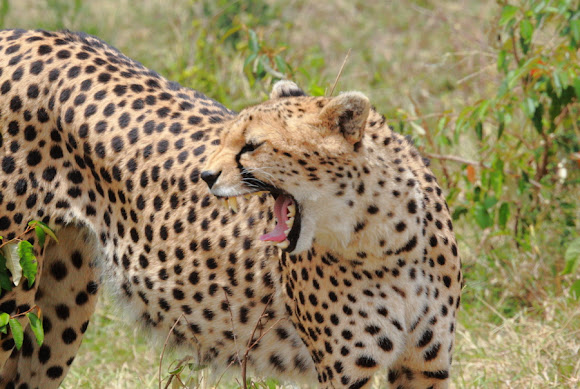 The cheetah is a carnivore, eating mostly mammals under 40 kg (88 lb), including the Thomson's gazelle, the Grant's gazelle, the springbok and the impala. The young of larger mammals such as wildebeests and zebras are taken at times, and adults too, when cheetahs hunt in groups. Guinea fowl and hares are also prey. While the other big cats often hunt by night, the cheetah is a diurnal hunter. It hunts usually either early in the morning or later in the evening when it is not so hot, but there is still enough light. The cheetah hunts by vision rather than by scent. Prey is stalked to within 10–30 m (33–98 ft), then chased. This is usually over in less than a minute, and if the cheetah fails to make a catch quickly, it will give up. The cheetah has an average hunting success rate of around 50%. Running at very high speeds puts a great deal of strain on the cheetah's body. When sprinting, the cheetah's body temperature quickly elevates. If it is a hard chase, it sometimes needs to rest for half an hour or more. The cheetah kills its prey by tripping it during the chase, then biting it on the underside of the throat to suffocate it; the cheetah is not strong enough to break the necks of the four-legged prey it mainly hunts. The bite may also puncture a vital artery in the neck. Then the cheetah proceeds to devour its catch as quickly as possible before the kill is taken by stronger predators.

You have a lot of great pictures!

Carol, Cheetahs are my favorite cat too !!!

My favorite kind of cat.