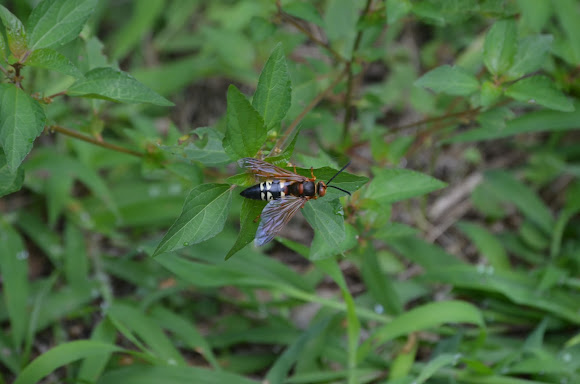 From bugguide: (see link in reference section for references used in this paragraph) Females catch and paralyze cicadas, often in flight. Known to take members of at least five genera: Diceroprocta, Magicicada, Neocicada, Quesada, and Tibicen, with the last being a favorite (Encyclopedia of Life). If the capture is made low or on the ground, the female may climb a tree to use as a launching point to fly towards its burrow; if no tree available, the prey is dragged (2). Nest tunnels (typically 6 inches/15 cm deep, with a branch of similar length) are dug in areas of bare soil. Several females may cooperate in digging a tunnel, which will have 2-3 cells at the end (1). Burrow entrance is large, 2-3 cm, with a prominent mound of excavated soil adjacent (8). One or two cicadas, are placed in each cell, and an egg is laid on the last one placed (1). In 2-3 days after egg laying, a larva will hatch and begin eating the cicada, leaving an outer shell only within about two weeks; the larva will then spin a cocoon and hibernate. In the spring, the larva will leave its cocoon and pupate. The adult will dig its way out of the ground and look for a mate. Males die shortly after mating. Females die after laying all of their eggs. Males emerge earlier than females and defend territories, typically 1 square meter or so of bare soil near their emergence hole. They usually perch on the ground and may occupy these territories for up to 12 days. They pursue receptive females that fly through the area. Rival males are attacked aggressively (9).