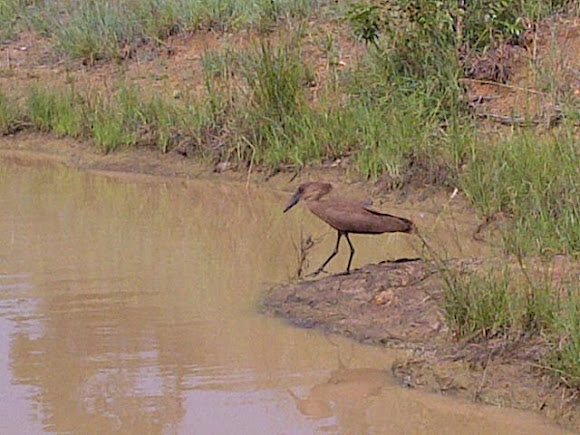 Its plumage is a drab brown with purple iridescence on the back (the subspecies S. u. minor is darker).[2] The bill is long, flat, and slightly hooked.[2] The neck and legs are shorter than those of most of the Ciconiiformes. The Hamerkop has, for unknown reasons, partially webbed feet.[4] The middle toe is comb-like (pectinated) like a heron's.[2] Its tail is short and its wings are big, wide, and round-tipped; it soars well. When it does so, it stretches its neck forward like a stork or ibis, but when it flaps, it coils its neck back something like a heron.[4] Vocalisations include cackles and a shrill call given in flight. Hamerkops are mostly silent except when in groups.

The Hamerkop occurs in Africa south of the Sahara, Madagascar and coastal southwest Arabia in all wetland habitats, including irrigated land such as rice paddies, as well as in savannas and forests. Most are sedentary within their territories, which are held by pairs, but some migrate into suitable habitat during the wet season only. Whenever new bodies of water are created, such as dams or canals, Hamerkops quickly move in