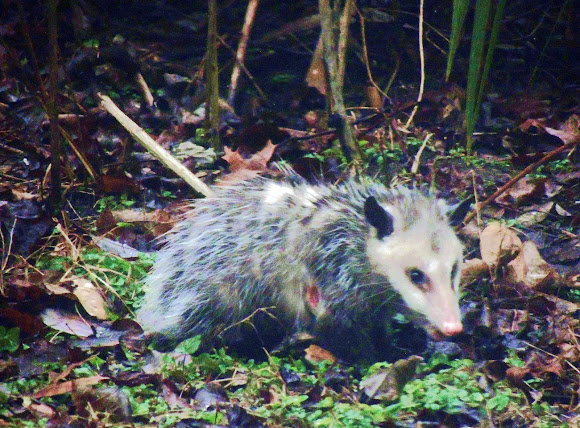 North American opossum (also called Virginia opossum) have been around a long time, living during the age of dinosaurs. A quiet animal. Has thumbs on its hind feet. Eats amost anything--beetles, cockroaches, snails, slugs, fruit, etc. Always on the move, going where the food is. Female gives birth in 13 days and carries them in a pouch. If attacked, it collapses and appears to be dead. Goes about at night. North America's only marsupial.

This opossum was spotted near our campsite at Palmetto Island State Park in Abbeville, Louisiana. I had spread some bird seed out for the birds and the opossum came to the edge of the forest and thoroughly enjoyed eating the seed. We were inside the camper and he did not see us. We did not bother him but enjoyed watching. Had never seen an opossum before.

You are right Hema. I looked at the picture again and he does have a wound on his right leg. I'm sure there are a lot of predators in the swamp here. Read on a website that these opossums have a lot of predators. Sad! I'm glad he enjoyed the sunflower seeds. Thanks

cute. This one seems to have a wound on the right leg,