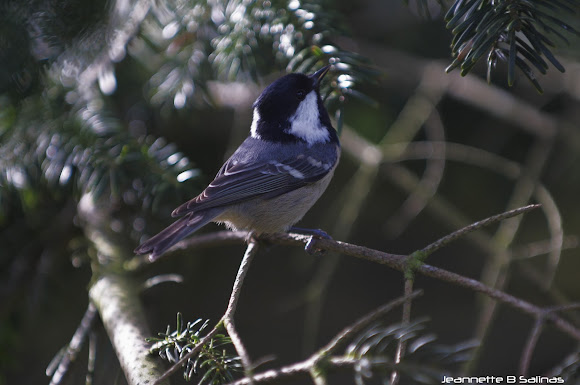 The Coal Tit, Periparus ater, is a passerine bird in the tit family Paridae. It is a widespread and common resident breeder throughout temperate to subtropical Eurasia and northern Africa. The Coal Tit is 10–11.5 cm in length, and has a distinctive large white nape spot on its black head. The head, throat and neck of the adult are glossy blue-black, setting off the off-white sides of the face (tinged grey to yellow depending on subspecies) and the brilliant white nape; the white tips of the wing coverts appear as two wingbars. The underparts are whitish shading through buff to rufous on the flanks. The bill is black, the legs lead-coloured, and irides dark brown. The young birds are duller than the adults, lacking gloss on the black head, and with the white of nape and cheeks tinged with yellow. While searching for food, Coal Tit flocks keep contact with incessant short dee or see-see calls. The species' song – if "song" it can be called – is a strident if-he, if-he, if-he, heard most frequently from January to June, but also in autumn. One variant of this song ends with a sharp ichi.

It is typically a bird of temperate humid conifer forest, but apart from that shows little habitat specificity.

I have added some more photos so you can see the difference between parus ater and parus palustris...

They are much smaller and faster than parus major I would not mix those two (and not yellow), but parus palustris and parus montanus are very close except for the white band on the head. I understand the confusion with the names in Danish it is called sortmejse which is black tit :)

... there are some... maybe this is because there easily taken for 'parus major' ... on first sight i would have done the same mistake... especially because in german the name for coal-tit is 'tannenmeise' which would be 'conifer-tit' while the great-tit is actually the 'kohlmeise' which would be literally translated ... coal-tit .... that's a mess...

Thank you Martin :)
I have noticed there are only two spottings of this bird on PN besides my spottings even though they are not rare...