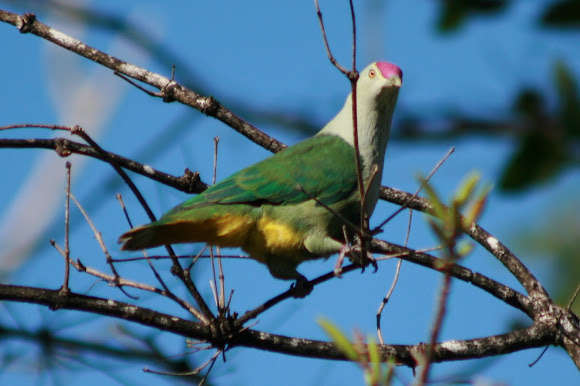 Also known as the Tongan Fruit Dove, or Purple Capped Fruit Dove A smallish dove, about 20cm in length with distinctive rose petal coloured/shaped top to its head. It has a plain grey/green neck and belly, with striking green wings, of darkening shades towards the tip. The rear end of the bird is bright yellow from the base of its legs, right up under its tail feathers, where it turns to a deep purple/black. Feet are pink and eyes are yellow.

Low lying forest canopy on the islands coast and throughout the island in the native bush. Here it would appear to have been nesting in coconut palms and using twigs from more bushy plants for the nest. Anecdotally, they love the fruiting trees of Niue, such as Noni, ebony fruit and are great dispersers of their seeds.

Heard all around the villages of Niue from dawn to late afternoon - relatively difficult to spot initially, but not particularly shy. This bird appeared to be nesting and was spending a fair amount of time picking up and dropping dead branches. On hearing a coo from its mate, it finally selected one and flew off, much like a scalded husband!!!

Congratulations Rach on your SOTD.

Thank you Mark and Felix for your congratulations and thank you especially to Daniele for helping to highlight the Niue project that I am trying to get established. Much appreciated.

Congratulations Rachel, this very special fruit dove is our Spotting of the Day!

"First time occurrence for this species on Project Noah! This Crimson-Crowned Fruit Dove (Ptilinopus porphyraceus) is our Spotting of the Day! Project Noah member remkinloch travelled all the way to the very small Pacific Island of Niue to spot this beautiful bird and other interesting wildlife. Ptilinopus (fruit doves) is a large genus of about 50 species, some of which are threatened or already extinct. They are found in Southeast Asia and Oceania. remkinloch has created a new mission for Niue's marine and terrestrial wildlife on Project Noah. She writes: "This tiny island, based in the Southern Pacific (nearly 450km from Vava'u and over 1,000km from the Cook Islands) is one of the largest raised coral atols in the world. It is especially noted as a breeding ground for humpback whales and the Niueans have campaigned hard to protect these and the many other marine mammals visiting the area. The island is surrounded by a shallow coral reef and subject to very little pressure from tourists. There is a growing awareness of their ancestral homeland amongst the many thousands of Niueans who live overseas (only 1,500 residents on Niue) but very little information on the island. Support from tourists, providing photographs and data on the island's wildlife will provide a valuable, free resource for those interested". Check it out! https://buff.ly/2vHDva9 "

Thank you Mark and thank you Ashley. Amazing week-long trip to Niue with my daughter, more photos to come. There doesn't seem to be much on-line about the wildlife of Niue, hence the Mission Niue. A beautiful, un-commercial island in the Pacific and wonderful for just walking/snorkeling around with a camera.

Good spotting. Thank you for sharing.

Thanks for your kind comments. It is an amazing part of the world. Very keen to get back there again one day. Well worth the trip if you want somewhere truly different to visit - very un-commercial!

Great spotting Rach, and interesting new mission. Well done and thanks for sharing this beautiful bird with us.

Great spotting from a very interesting part of the world!

Thanks Daniele. I am hoping to get in touch with the local operators and the resort I stayed at and see if they can encourage clients to contribute.

Great series and information remkinloch! Also, thanks you for starting a most interesting and unique mission for Niue wildlife.