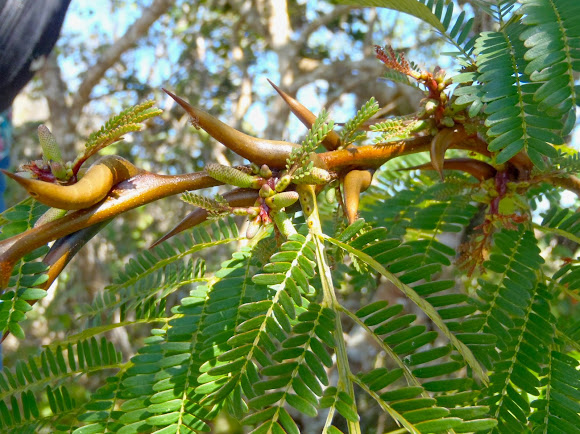 This swollen thorn acacia was flowering and also has fruit. The bees that pollenate Acacia flowers have to be very persistent and visit many bushes to get past the patrolling ants. The yellow Beltian bodies on the leaflet tips that the plant produces as food for the ant's larvae are not visible, but the glands that produce nectar for the ants are visible at the base of the leaves (little pit-like structures). There is a hole in the tip of the thorn to the far left of the first picture. Theses holes are the entrances the ants make to live inside the hollow thorns where they care for their eggs, larvae and pupae. By tapping on the tree, the ants will begin to leave their holes to defend the tree. After a few minutes there will be hundreds. There are 3 ants visible on the this branch. This is one of the great examples of symbiosis between plants and insects.

The bullhorn acacia (Acacia cornigera), a swollen-thorn acacia native to Mexico and Central America. In its native habitat, colonies of stinging ants (Pseudomyrmex ferruginea) occupy the hollowed-out thorns and fiercely defend the tree against ravaging insects, browsing mammals and epiphytic vines. In return, the host supplies its little guardian ants with yellow protein-lipid Beltian bodies from its leaflet tips and carbohydrate-rich nectar from glands on its leaf stalk (volcano-shaped structure just above pair of thorns). There is no known function for the Beltian bodies, except to provide food for the symbiotic ants. These species of Central American swollen-thorn acacias lack the chemical defenses of most other acacias to deal with their predators and competition. Without bitter alkaloids, ravaging insects and browsing mammals eat the leaves and branches, slowing the growth of the acacias and allowing fast-growing, competing vegetation to shade them out. Symbiotic ants have taken over this vital defense role, protecting the acacia from hungry herbivores and pruning away competing plants. The ants live inside inflated thorns at the base of leaves.

Thank you Leuba and Argy Bee, I love the symbiotic stuff too!

Hi Jonathan, I had never heard of Subim before, but it certainly looks like it from this site. It is neat that they use the thorns for making things. I would love to have a wind chime of this, but would hate to battle with the ants!
http://sistemasiqm.sytes.net/prodemaya/s......

Fascinating spotting and very interesting information ! Thanks for sharing this...

Excellent information. Thanks Lauren - I love this symbiotic stuff.