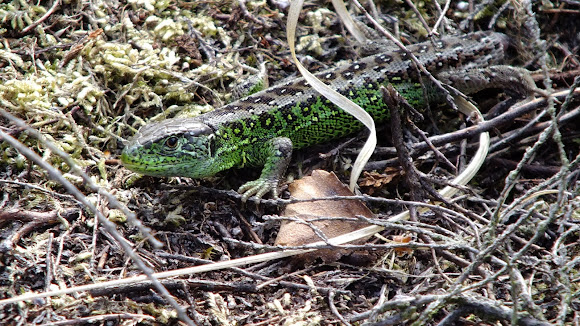 The sand lizard is also known as the dune lizard. It is part of the lacertid lizard family. The sand lizard is a ground dweller that forages for food in the vegetation. The male lizard can be identified by its green colour. The female is brown. Its length from head to tail is roughly 16 to 20 cm. The lizard has a relatively large head and blunt snout. At night and in cool or damp weather, the lizards return to their underground holes. The sand lizard is only active in sunny weather. They are voracious and chase anything that moves and fits in their mouths. Their diet consists largely of insects and other small invertebrates. When the temperatures rise during the day, the sand lizards retreat to their underground lair. Sand lizards dig burrows in which to hibernate. Males can begin hibernation from late August to early September but females often start to hibernate about a month later, in September or early October. Sand lizards emerge from hibernation in April and May.