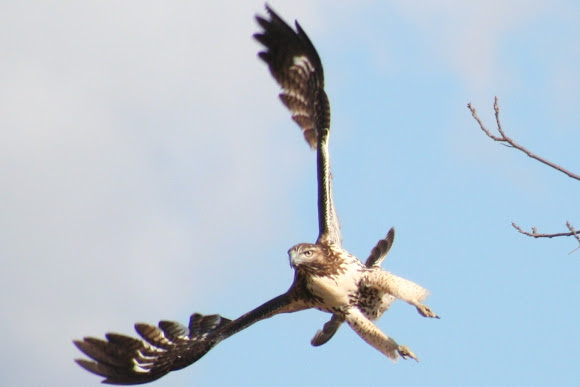 This is probably the most common hawk in North America. If you’ve got sharp eyes you’ll see several individuals on almost any long car ride, anywhere. Red-tailed Hawks soar above open fields, slowly turning circles on their broad, rounded wings. Other times you’ll see them atop telephone poles, eyes fixed on the ground to catch the movements of a vole or a rabbit, or simply waiting out cold weather before climbing a thermal updraft into the sky. Most Red-tailed Hawks are rich brown above and pale below, with a streaked belly and, on the wing underside, a dark bar between shoulder and wrist. The tail is usually pale below and cinnamon-red above, though in young birds it’s brown and banded. “Dark-phase” birds are all chocolate-brown with a warm red tail. “Rufous-phase” birds are reddish-brown on the chest

The Red-tailed Hawk is a bird of open country. Look for it along fields and perched on telephones poles, fenceposts, or trees standing alone or along edges of fields.

Fantastic shots Kim!! I see them all the time and never tire of them!!

OMG! This is just beautiful! Congrats on the great shots! Don't you just love juvi red-tails!