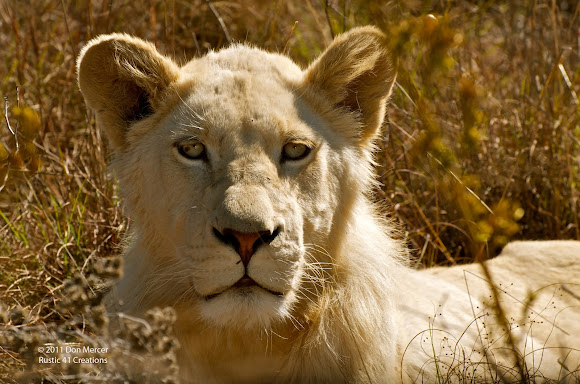 The lioness is a big cat that lives from 10-14 years in the wild and, at times, to over 20 years in captivity. This particular lioness was a "white" lion, one that has a recessive gene, one of the sub-species, Panthera leo krugeri. The lioness does most of the hunting in a pride, or family, of lions while the male watches the young when the lioness or lionesses are obtaining meals for the entire pride. They are primarily nocturnal hunters.

Lions range throughout much of Africa, with the exception of in the Sahara, and into parts of southeastern Europe, as well as in some of the Middle East, to include as far east as India. However, predominant populations of lions today are found mostly in wildlife reserves and national parks.

This lioness was part of a pride at the Rhino & Lion Park outside Johannesburg.

Based on one comment by Flavio Oliveira, I went back in my image files and added three more in an attempt to better display the attributes of this "white" lion, as available natural light was an issue when taking these images. The second image posted, while not providing the best pose, is perhaps the optimum with respect to the "whiteness" of this lioness.

This image was taken in mostly flat light which accounts for the paleness of this "white" lion.

Here is an interesting read regarding the white lion Flavio: http://en.wikipedia.org/wiki/White_lion