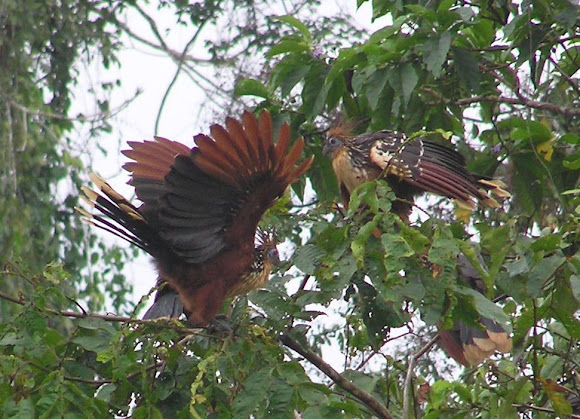 Large brown bird with beige breast and tips of tail feathers. It has a beige crest and a bright blue face.

They are literally along almost every river in the Amazon rainforest of SE Ecuador. The one in fotos #2&3 is eating leaves along the river, their sole diet. They sometimes feed quite low and roost higher at night. FYI- the map on Wikipedia is incorrect. The Hoatzin is found much further west in Ecuador than shown.

They often spread their wings and emit a loud long hissing sound. For that reason the natives have named them "saasa" said slowly and nasally to imitate the sound the bird makes. They are considered inedible so don't have much fear of people allowing one to get reasonably close for pictures. I have videos of their hissing display as well as eating leaves but don't know how to get them on here.

I am not very familiar with . mov formats...when I shoot videos I upload on YouTube and post the link.
Sometimes my computer has a problem with posting the video link in the place provided by PN...so, then I put it in the Remarks section and it works fine.
Hope you can upload your videos...you can ask techsupport team for help too.
Good luck.

Thanks Sukanya. I have some pretty cool videos of these and other birds and animals but have no idea how to get them on here. They are in ".mov" format and I don't know how to convert them. It is strange that, while they are wild and somewhat standoffish, because they aren't hunted, they aren't as skittish as most birds in the area.

A bird with many strange traits...learnt about these in college...how wonderful that you get to see these...and thanks to you, so do we. Thank you for sharing.