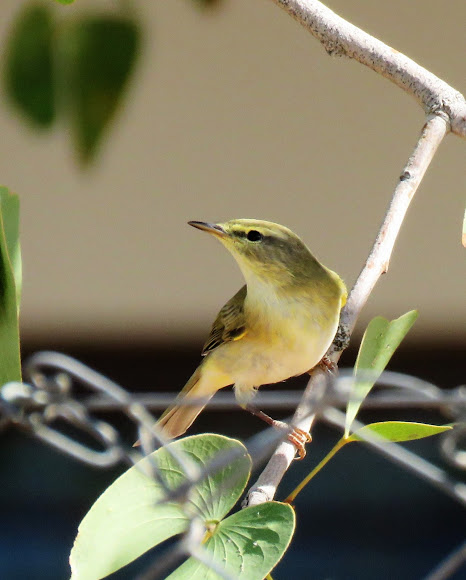 This is a common and very lively bird, a bit smaller than a sparrow. Olive green above, and yellowish bellow, with a distinguished yellow sourcil - I expect this one to be the Phylloscopus trochilus yakutensis, subspecies found in eastern Siberia where it breeds, and Southern Africa, where it winters.

Here, observed in a tree at a small town periphery, where the town vegetation starts to melt into the natural one, arid acacia tree-and-shrub landscape of lower Kunene region, around the town of Khorixas. Highly migratory bird that winters in Africa, and breeds in woodlands of Europe and Asia, where is also very common. During my stay in Namibia, I observed it few times, always in similar environments, in town peripheries.

The Willow Warblers are very common in the region of Southern Africa (as they are in Europe too). I was interested in spottings from Namibia (and SA region in general), as they are supposed to be of the subspecies I normally wouldn't have a chance to see, and that probably detains a record for a longest migration route for the bird of its size. Phylloscopus trochilus yakutensis is the subspecies breeding in eastern Siberia between May and September; and travels aver 12000 km to join Southern Africa where it winters between October and April (this migration is well summarised on Willow warbler page in Wikipedia; link hereby) .

Beautifully coloured plumage. I can tell from your shots that this one must be quite a lively bird, as you say. Thanks.